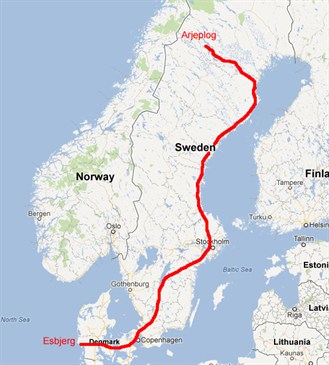 Denmark is probably very nice, but from the motorway, at the start of a drive to the Arctic Circle, it seemed mostly unremarkable. That is apart from the tolls on the two large bridges we crossed, they were truly astronomical. Quick checks all round to see if the decimal point on the price was actually in the right place.

Esbjerg to Arjeplog is just over 1,200 miles, a journey we started at lunchtime on the Monday. We had chosen to do the drive in one hit partly to save on the cost of hotels but mostly to give our mechanic/driver candidates their first sustained task. Every few hours they would rotate between driving, resting and navigating, changing at fuel or food stops. After a while the job of the navigator is less map reading and more to make sure the driver stays awake. The house rule in the Transit minibus was that the driver got to choose the music.

It didn’t take long for us to realise that those travelling ‘Transit Class’ had the better deal. We generally had more room to stretch out and where the seats had been removed at the back, to stack equipment, there was a level and quite comfortable sleeping platform. We also had a couple of portable DVD players – life was good. These luxuries did not exist in the Finning Service van or Anton’s panel van.

Having the three candidates rotate the driving allowed the selection team to observe how they interacted, what they had to talk to about, the views on a wide range of subjects not forgetting their driving ability and mechanical sympathy. Andy Thomas of Finning was with the other two candidates in the Service van and we would chat at fuel stops to get a measure of how they were fairing. Interestingly, offers by us to swap personnel amongst the vehicles were turned down, each sub group quickly developing its own identity.

It is always interesting to see how Ran is when ‘in the field’. Temporarily removed from the strategic tasks of the expedition, such as dealing with sponsorship and permits, he comes alive and is far more relaxed.

The drive through the night was a long one and for almost all of the stops for fuel and food, the diet was McDonalds. This is OK, but for breakfast, dinner and lunch it doesn’t take long to go through the menu. The ‘golden arches’ have done very well in Sweden.

In the North of Sweden, with occasional glimpses of the Baltic, the countryside was whiter, colder and the roads much quieter. This was an opportunity to film scenic footage. There was much leapfrogging of vehicles dropping off Geoff with his camera, with Steve and Tomo to act as spotters and on the radio to the convoy hiding around the nearest bend. This filming provided welcome breaks from the driving and a bit of fresh air. The artistic reservoirs however were soon exhausted – we tried the camera, high, low, wide shots, tight shots, static, panning and everything else we could think of that would meet the demands of Mark Georgiou of the BBC. The locals were then treated to Geoff hanging a very expensive Panasonic camera out of different windows of the moving van to get actions shots (and cold hands).

Later in the day we got our first moose warning road signs. These and reindeer are a major traffic hazard in this part of the world. They are wonderfully adapted for ending up through your windscreen and are very solid, heavy beasts. They also seem to find roads fascinating. It is for their benefit that most of the trucks in the north have enough lights to make Blackpool seem dull. This light-fest is not much fun if you are driving the other way, completely blinded as they pass and then dealing with a cloud of spindrift snow.

The afternoon of Tuesday 31st January and after two days of non-stop travelling we pulled into the Colmis Vehicle Test Facility on the outskirts of Arjeplog – consider it to be ‘Millbrook on ice’. With our documentary making heads on, we didn’t just all head into the reception but checked that we could film in there and positioned Geoff to capture the process. There was much repeating of signing in by the same people from different angles and amounts of zoom. The poor girl on reception had probably had quite a normal day up until then. 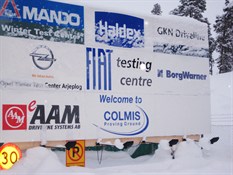 At reception we were joined by Heinrich Huchtkoetter and Ricardo Weber from GKN Driveline. Heinrich had been our link with Colmis and handled all the local arrangements. It was through his efforts that we had a test track built to our unusual requirements. GKN Driveline work for all the major vehicle companies and come to Colmis each year to test new systems both on the frozen lake and the specialist landside track facilities.

Our first meal was in the simple dining room of the Simloc Hotel in the centre of Arjeplog. The menu was bread, cheese and Elk soup, a first for many of us. Once fed and watered, Ricardo from GKN led the convoy to our accommodation. This was a local house which, like many in the area, is rented out during the depths of winter to the visiting car test engineers. No one knew the Swedish for ‘compact and bijou’ but it was apt here and we had a lot of people to cram in with more due later. 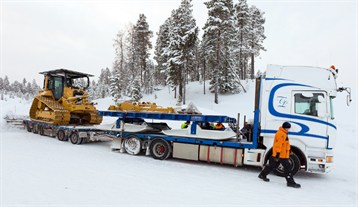 The D6N Caterpillar we were to use for our test programme had arrived from Cannock ahead of us. This vehicle was one of the two that would go to Antarctica and it had been fitted with some, but not all of the intended modifications. The tests in Sweden would provide the confidence to push ahead with the final changes to this vehicle and to start the other one back at the Finning facility in Cannock.

Somewhere on its travels the D6N had been removed from the vehicle on which it left Cannock and put onto the trailer of another truck (left). On the bed of the truck itself, was the Lehmann sled that was also a key part of the test programme. Whilst it was great to see them both here together we now had a problem.

The loading ramps of the trailer were nowhere near robust enough for unloading the 18-tonne D6N. The truck driver pointed out a fixed loading ramp that he could back up to. The site owners looked at the modified, aggressive tracks of the D6N. Designed to bite into Antarctic glacier they would destroy this ramp and so we couldn’t use it. 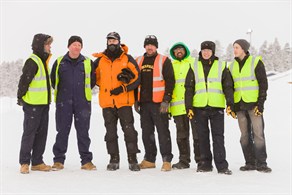 It was at this point that the cavalry arrived (left, with Sir Ranulph). At first glance they did little to resemble your classic heroes – more a bunch of bemused and amused mechanics. They were in fact the test team from Perkins Engines in Peterborough. Perkins are part of the Caterpillar empire and we had heard that there was supposed to be someone from CAT here but had not been able to make contact with them whilst in the UK. The Perkins cavalry had something much better than horses – heavy plant equipment. Rather than destroy someone else’s unloading ramp we would build our own (below). 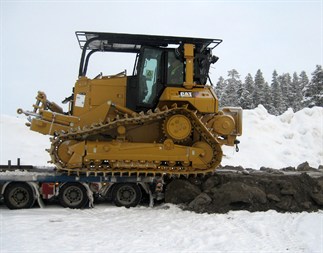 With the bulldozer safely offloaded, the next issue was fitting its blade (below). We would have liked this to be done just by our candidates but it is a heavy piece of equipment needing precise fitting, so we combined forces with the Perkins team to do it as safely as possible. Injuries this early in the process would have been most unwelcome and by all accounts the required incident report paperwork would weigh as much as the vehicle. 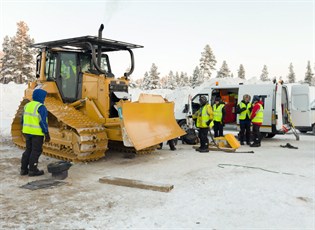 We now had a functioning vehicle but our test track was over the hill. There was obviously no point in reloading onto the truck and, because of the vehicle’s track design we couldn’t drive out onto the main road without ripping that up. The remaining option was a stint of cross-country driving and trying not to take out more trees than strictly necessary.

The line of least resistance was investigated on foot and a plan put together so that the excursion could be filmed and photographed from safe vantage points. With everyone in position we were off. Some existing tracks were used for the first few hundred metres and then the vehicle headed off over the brow of the hill. The damage was limited to a few saplings. 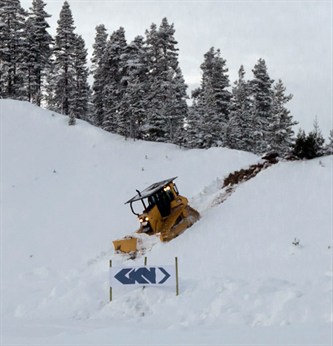 Soon the D6N overlooked the test track with one sharp drop down a bare snow slope to negotiate (left). With confirmation all round that whatever was going to happen would be caught on camera, the vehicle slowly moved to its balance point and then launched down the hill. There was sharp intake of breath as it started to veer sideways but this was caught and it rolled onto the flat ground at one end of our prepared test track. A round of applause was well-earned.

Last job of the day was filling a huge pile of dumpy bags with ballast for the sled (below). To make the towing and fuel burn tests for the D6N meaningful we needed to simulate the weight of the caboose that would live on the sled. In the darkness the team beavered away before heading back to our new home from home.

A whole day had been spent unloading the vehicle, fitting its blade and moving it to the track. None of this counted as part of the formal testing but was an great illustration of how things will be away from the normal world – and at the moment it was still relatively warm. 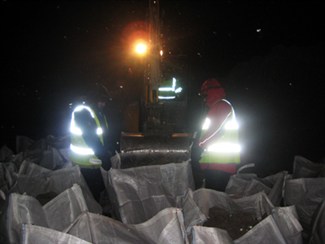 From the candidate selection perspective, this series of delays and obstacles was very useful. Seeing how the individuals responded to events, who put themselves forward with ideas and who stayed in the background was all very telling.

We were now ready to actually start vehicle testing…