Like a wide-eyed school boy, I stared up at the huge, gleaming machine which was shuddering in the test compound; a symphony of yellow and black painted and precision welded steel. Each one of its thousands of components selected with one goal in mind – making this one of the toughest and most reliable vehicles in the world. It was small versions of machines like this that, as a child, I built on the living room carpet from Lego, before putting them through their paces along home-made ramps and over the imagined terrain of the mountainous sofa. Here I was, sharing a field with a full-sized dozer (or D6N track-type tractor to use the correct vernacular) and I felt small. Very small. It looked to be about the size of a decent studio flat, easily cost twice as much, and the CAT experts were about to show me how to drive one. 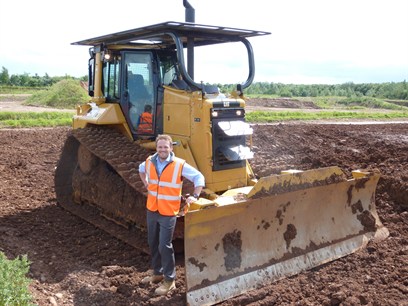 The whole event had been kindly organised by Finning (UK) to enable us to get to grips with driving the D6Ns. It was really important that we all had an understanding of their controls and capabilities as in an emergency, any one of the team could be called to action.

We started with a safety briefing, donned high vis jackets, hard hats and trendy steel toe-capped CAT boots and were split into groups. I was in the middle of sourcing some equipment for the expedition and my phone would not stop ringing that morning, which meant that I had to hold back from the first few waves leaving to cross the compound for training. This left Ran and me as the last group. Our tireless leader was working through a mountain of paperwork and I suspect, quietly attempting to delay the inevitable technical briefing and the potential for driving through somebody’s wall or activating the ejector seat.

As an introduction, we were given our initial tuition on a smaller Cat D5K which used the same control systems as the full-fat tractor the team would be using on the ice. We had a spin, Ran taking to the intuitive controls quickly. Within no time, we were both driving in concentric circles, figure of eights and shaking the blade (on purpose). It was certainly a fun way to spend a morning. Obviously, we were hard at work! It was for the good of the project that we were whooping like excitable children, lifting the blade in the air and then grinding the ground into neat strips. Our confidence grew under the gentle and patient teaching of the training manager. With the turn of the key, we hopped from the cab and were escorted to the rear of the facility where one of the pair of D6Ns was waiting for us along with the rest of the team. Ian had taken to it quickly and as we neared, Brian was finishing a route up and over a 3m mound of soil, built in the middle of the test field. Everyone was grinning. It was hard not to. We were all fulfilling early childhood fantasies and the joy was infectious. Brian parked up next to the group, the ground shaking as he neared.

It was my turn and I clambered up the tracks and sat in the sprung padded operator chair. A CAT expert gave me a run through of the control panel and despite the added complexity of the machine, things were amazingly easy. I was lead on a route around the test area, growling over the central hill and dropping deftly down the other side. Left to my own devices I decided to test my new skills. What I discovered was that every limb operates something different. The left hand operates the blade, your right hand forward and backward. Each foot can operate the safety brake system. In the actual D6Ns going to the Antarctic there are a host of other functions in the cabin for communications, status check and much more; today we had to crawl, tomorrow perhaps we could move to the run. 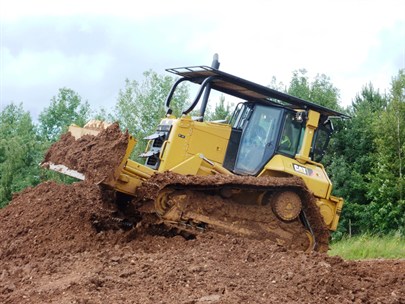 Now, I have seen Spencer and Richmond drive. They can operate a D6N like a surgeon with a scalpel. They could blitz across uneven ground, spin on the spot and use the blade to shave the icing off a Christmas cake leaving only the marzipan (and they probably wouldn’t even need to look). It was with bitter disappointment then, that after being handed the controls I attempted to surmount the mound earth, only to slip backwards into the muddy pit at its foot. This was met with a cheer from the CAT engineers who had been doing wheelies in it all afternoon. Everyone had the opportunity to put the machine to the test and Ran went next, picking it up quickly.

As the CAT growled behind us, Ran climbed back to the verge and said a few words. We all knew what was about to happen. Ian Prickett had been drafted into the team to help with construction and equipment as a temporary measure. Unfortunately, he had proved to be so useful and such a nice chap, that it was decided he should be made a full member of the team off to Antarctica in January. Ian was over the moon. I knew it couldn’t have been given to a better guy. With Ian now part of the Ice Team, I knew we would do it.

We played around in the field, I mean worked very hard in the field, for the best part of the afternoon before finally turning the switch to silence and heading indoors for a debrief. Learning how to shift a D6N is surprisingly simple. Being able to use it to its potential, however, is another matter altogether. Some of the world’s best drivers work for Finning, and amongst these two of the very best are on our expedition in the form of Spencer Smirl and Richmond Dykes. Think Top Gun with bulldozers. Having had a go, I really take my hat off to them for the way they are able to handle these machines so effortlessly and with such precision; then if you take into account that they are also expert mechanics you realise just how valuable they are to the team and the expedition’s success.