Although the Ice Team has its very own doctor, you have to assume that there will be times when he is not immediately available and it may be the doctor himself who needs help. Antarctica in the winter presents its own special issues and how we would adapt ‘normal’ first aid procedures to that environment has been a big part of our training. 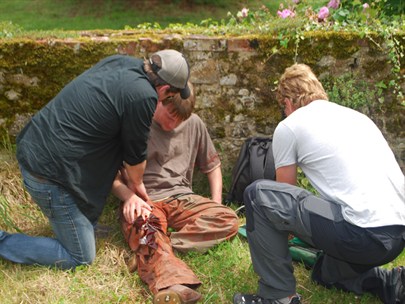 The two-day course was provided by Remote Trauma in late June. As everyone in the UK knows, this summer was pretty horrendous; ironically, for our Antarctic winter training it was sunny and warm. The event is a very hands-on and extremely beneficial medical training course, and is the same course that journalists and news reporters will enroll in prior to their departure for war-torn nations and other locations of clear and present danger.

I have attended an annual presentation of different versions of first aid courses over the span of the last decade. Working a half mile underground in a diamond mine dictates that you have to be very comfortable and capable with various forms of disaster prevention and first aid. That being said, the Remote Trauma First Aid course was far more hands-on and necessarily informative than any other form of medical training I have received. Our instructor, Grant Wootton, made it a very two-way process which kept everyone focussed. 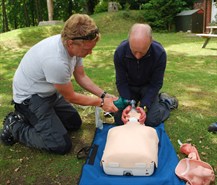 The Ice Team, as it existed at the time, was in attendance along with Tristam Kaye, Steve Holland, Geoff Long and our former physician, Dr. Mike Stroud and his son Callan. Callan had just qualified as a doctor himself and it was interesting to see how hospital skills transferred to this situation. Attending a course such as this one, and to be aware of not only your growth as a first aid attender, but also, to watch all other members of your team grow in the same way was good for helping us become a team. 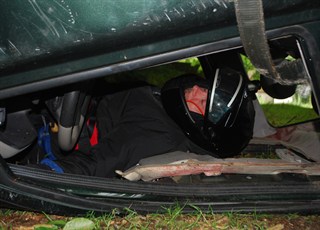 Most other courses you would attend would have you stuffed up in some barely tolerable classroom, with some instructor reading to you from a text book. Then you would team up and have a turn at the plastic dummy on the floor. The Remote Trauma course was based on much more realistic situations with overturned vehicles and fake blood being pumped out of wounds. We were fortunate that Geoff Long and Callan Stroud were willing volunteers as casualties and that their acting was convincing.

I noticed that having ‘live’ casualties to train with I was putting in more serious dedication in this course. I would like to think this was the result of our impending adventure, but I think some of it was the warm human body coughing blood in my lap as I tried to assess an obstructed airway. I noticed this same intense concentration in all my team mates. Knowing that they would, like me, have a sharper eye for danger and a quicker response to it makes me glad we attended.

“The Remote Trauma course was based on much more realistic situations with overturned vehicles and fake blood being pumped out of wounds.” 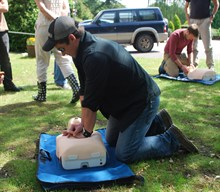 One of the key things we worked through as a group was how we could apply the rules of life-saving when both casualty and first aider are dressed for -60C: you can’t feel a pulse and you certainly can’t start stripping off the casualty to look for wounds.

One of the issues with all the clothing layers, especially the down jacket and salopettes was how good this would be at soaking up blood without it even being visible from the outside. Someone could be losing a lot of blood and we wouldn’t know.

We soon concluded that that the best option was to check for an airway, which is in itself not easy with helmets and facemasks, and then move the casualty into the caboose to carry out all the other drills. From what we learnt, this ‘scoop and run’ rather than ‘stay and play’ seems to be some sort of ongoing debate for dealing with casualties in more normal environments as well.

One of the changes to field first aid that has come out of the conflicts in Iraq and Afghanistan is the increased use of the ‘combat tourniquet’. The use of tourniquets has always been a big no no in the early courses I have done but these new models have saved many lives and we will have some with us. 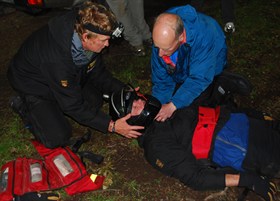 The other really good thing with the live scenarios was to be able to look at the wider scene, not just the casualty. This helps with making sure you take steps not to become a casualty yourself. In Antarctica there will be just a small team and limited resources so stopping a bad situation from getting worse is a big deal.

Each live session was followed by a debrief which got everyone involved – we all had different real-life experiences which were worked through. This was great for learning more about our fellow team members and how they think and operate under pressure. 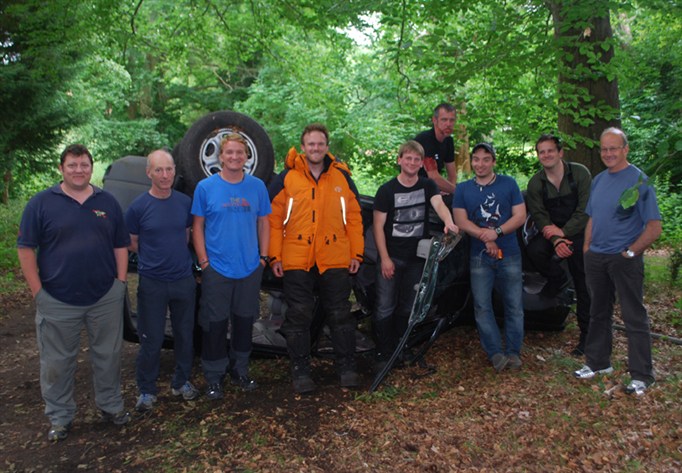