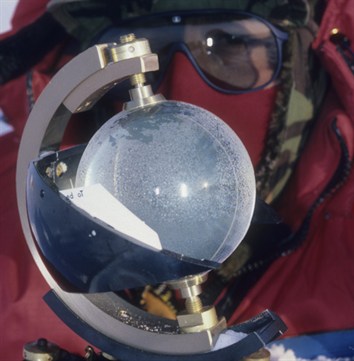 The decision to draw a halt to the expedition’s aim of completing the first ever crossing of the Antarctic during winter has made it necessary for certain changes to be made to the science programmes that were being undertaken during the traverse. However, far from having a negative impact on the science work, the fact that the team will be over-wintering high up on the Antarctic plateau in itself presents unique opportunities to collect invaluable data.

The scientific mission of The Coldest Journey encampment is to undertake careful sampling of the chemistry, physics and biology of the surface snow at the camp, to accurately monitor the surface motion of the ice, and to make regular weather observations.

The team will also continue its important medical and psychological tests as part of the White Mars project.

Dr Dougal Goodman, Chief Executive of the Foundation for Science and Technology, a member of the expedition’s science committee said: “I am optimistic that the team will be able to make the most of the decision to stay where they are now.  They will be able to devote their energies to the medical, glaciological and snow sampling research programmes.  This is a rare opportunity to gather data during the winter at high altitude and distant from the coast.”

The science projects the Ice Team are undertaking can be split into biological, hydrological, glaciological and human sciences. The biological, hydrological and glaciological projects were chosen following an announcement of opportunity and submission of proposals by international scientists organized by Dr Tim Cullingford, and a selection process by the Expedition Science Committee chaired by Sir Peter Williams (Former Vice President of The Royal Society) and Dr Dougal Goodman. The human science research programme was created by Dr Mike Stroud and Dr Alex Kumar in conjunction with the Kings College London Centre for Human and Aerospace Science.

The key projects now being undertaken in and around the encampment are:

Capturing chemical (water isotope) and photographic data on changes in snow precipitation, drifting & surface features.  The Team will also take this rare opportunity (only so far achieved in four other locations) to create a photographic record of how wind shapes the surface, height and spacing of drift features (sastrugi, ridges, etc) of undisturbed snow (surprisingly difficult to find on a typical traverse!).  By analysing the chemistry and physics of snow that is being re-mobilized, will provide data about atmospheric dynamics (wind action, moisture transport and surface temperature) at the site.

Bacteria in the Extreme Cold

The team will continue their recovery of snow/ice samples to document the biology of potentially unique cold-tolerant micro-organisms that can survive in this extreme environment.

The naturally slow coastal-bound progress of the ice sheet (ultimately calving off as coastal icebergs into the Antarctic Ocean) has been extensively modelled.  The team  will monitor surface motion to test the model predictions using a precision GPS backed up by repeated GPS observations throughout the period the team stays at its current location.  The onboard science caboose GPS unit will continue to provide centimetre precision geodetic quality GPS position fixes of the encampment.

Meteorological data will be posted on the Met Office Weather Observation Website (WOW) (http://wow.metoffice.gov.uk), for use by schools and others interested in monitoring the weather at the site.

Similarities exist between the conditions humans encounter on a winter Antarctic expedition and those found in space. The objectives of this project, which is made up of around 20 different components, are to examine the physiological and psychological effects of both acute, intermittent exposure to extreme cold and chronic exposure to loss of the day/night cycle, low oxygen levels of the Polar plateau and stresses of living and working in a small group in a hostile, threatening setting. The studies include assessment of nutrition and hydration status, measurements of circadian hormonal changes, and monitoring of sleep patterns and changes in mood and motivation.

Dr Stroud, who is pioneering ‘White Mars’ alongside Dr Kumar, said he was confident that the change in objective would still provide valuable information.

“In particular the psychological studies will be of great interest,” he said. “No one has remained at high altitude in a mobile camp in Antarctica throughout the winter before. They could experience temperatures as low as -70⁰C and coupled with the permanent darkness and claustrophobic conditions, the stresses will be all too apparent. Future space travel will require similar endurance. This is the perfect terrestrial testing ground.”

Find out more about the White Mars project here.