The Expedition / The Coldest Journey

For more than 100 years the world has witnessed a golden era in modern exploration, as adventurers from across the globe have battled against each other to overcome the great polar challenges. Today only one true challenge remains – to be the first to cross the Antarctic in winter.

Ever since US Navy engineer Robert Peary allegedly reached the North Pole in 1909 and Roald Amundsen and his crew reached the South Pole in December 1911, there have been numerous successful attempts to close out the remaining challenges. Although a team of Norwegian explorers achieved the astonishing feat of crossing the Arctic during winter in 2010, crossing the Antarctic in near permanent darkness and in temperatures as low as -90C has by many  been seen as one step too far – until now.

On 21st March, 2013, five experienced and dedicated explorers will set off from Crown Bay in Antarctica on their record-breaking attempt to do the unimaginable. There can be no mistake, attempting to cross the continent in winter carries very high risks and completing the challenge will require extraordinary endurance, bravery and will-power.

The ground-breaking venture is one of the largest non-governmental initiatives ever to take place, and it is fitting therefore that it should get underway on the centenary year of Captain Scott’s death in the Antarctic. Achieving their goal will further cement Britain’s reputation as the world’s leading nation of explorers and be a fitting conclusion to an extraordinary period in human history.

The Foreign and Commonwealth Office has up until this expedition refused to grant permission to take on the challenge because it has always been deemed far too risky and the chances of disaster too high. This decision was only overturned after it was shown technological innovations could mitigate some of the major risks of the crossing.

Despite this change of heart, the risks remain high for the team; simply by inhaling air below -60C can cause irreparable damage to the lungs (the average winter temperature at the South Pole is approximately -60C!) and exposure to the skin to such temperatures causes severe frostbite in a matter of seconds. If anything should go seriously wrong, a search and rescue mission would be impossible since aircraft cannot fly in such cold conditions due to the threat of their fuel freezing. In the event of a major incident, the crew will have to sit out the winter on the ice until summer when a rescue attempt can be made.

The selected crossing from Crown Bay, via the South Pole, to Captain Scott’s base at McMurdo Sound, will take six months – mostly in complete darkness – and span more than 2,000 miles. In total, the team will spend an estimated 273 days on the ice, and once under way, travel at an average of 35km per day, with every one day in three being allocated as reserve (for rest or bad weather). 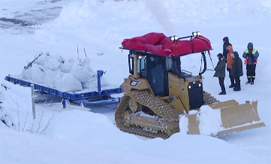 Throughout the crossing a two-man ski unit will lead the party, dragging a pulk kitted out with a ground-penetrating radar. This radar will transmit real-time information about the terrain – and any crevasses – to a Mobile Vehicle Landtrain (MVL) following close behind, which will be made up of two modified Caterpillar D6N vehicles each towing a caboose and store and fuel sleds. If crevasses are discovered they will be assessed as potential threats and if they are deemed significant or too large to fill an alternative route will be taken.
The team will eat and sleep in one of the heated cabooses, while the other will house the expedition’s scientific equipment and workshops. Due to the bitter conditions the team will be wearing specially-engineered heated clothing that is vital to keep them alive and make the crossing possible.

During the traverse, the Ice Team will receive regular communications from, and a link to the outside world via, the Expedition Office based in London and headed up by Tristam Kaye.