The Expedition / Preparations and Training / A Swedish Saga / Sweden – Part Four: The Pond of Doom

We had been in Arjeplog for the best part of a week now, all 15 of us crammed into Farholm, our small rented house. Excellent, fortifying food was provided in hot containers at the house and on the test track by Karen Ingerbritsen and her team from the Simloc Hotel. They, like all the locals we met, had such a positive and refreshing ‘can do’ attitude, obviously fostered by their remoteness and the long winters.

Of our remaining tests, the most dynamic promised to be the crevasse crossing. Back in October, before the snow came, the GKN team had arranged for a series of trenches to be dug to our specification. These then filled with snow. We had four of them in a long run next to the main test track. The first was a metre-wide ‘warm up’. The next was significantly wider but should not present any major issues. The third comprised two metre-wide trenches set only a metre apart so that the vehicle would still be dealing with the first when it encountered the second. The last trench was set at the D6N’s limit such that it would need to use its front blade and get assistance from the mass of the caboose behind. 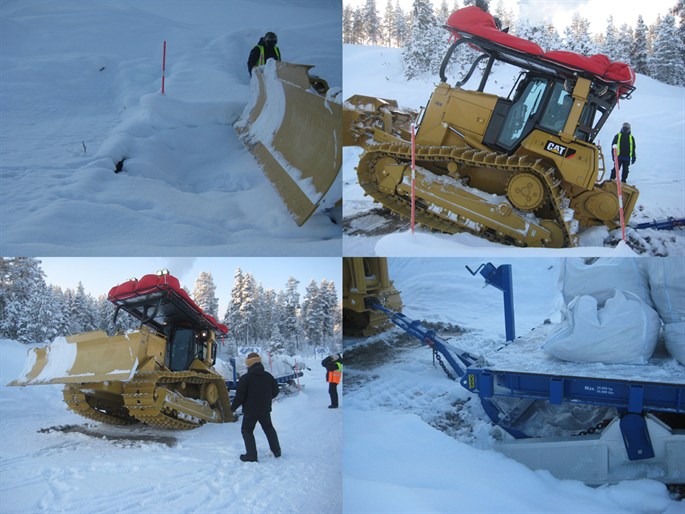 The crevasse crossing provided an opportunity to introduce the ‘Eagle’ Close Combat radios. Manufactured by Cobham, these came with the ability to create connected groups and a voice activation option. Matt Stevely, the driver, was connected with Spence, Steve and Andy Thomas who were marshalling and spotting. With this system we were able to calmly chat through commands and provide information despite the noise of the hard working D6N and trailer. An artfully positioned Go Pro camera was able to capture some great shots despite coming within a hair’s breadth of the tow hitch of the D6N as it climbed out of one the crevasses.

In Antarctica there will be a lot of preventative vehicle maintenance and servicing. To create a safe microclimate in which to perform this work, each vehicle will have a roof-mounted canopy. Sweden provided the chance to fit this for the first time, and allowed us to run an overnight test. 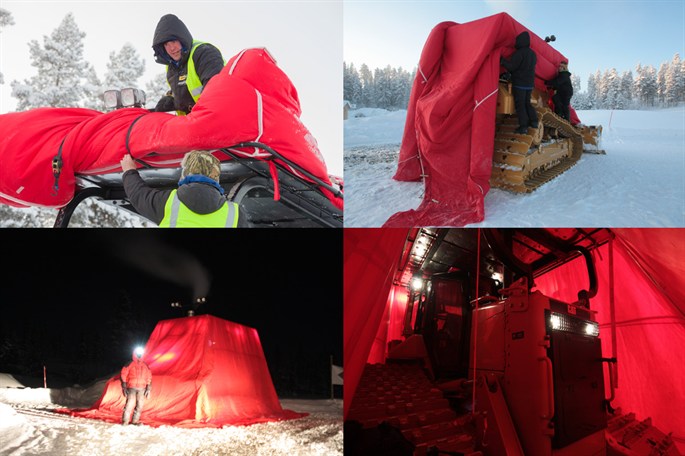 …and so to bed for the night.

Deployment worked well and the heat given off by the vehicle soon warmed the canopy. Geoff Long used his thermocouples and data logger from Portsmouth University to record the temperatures. The data showed that whilst it was -35C outside, inside it was +10C. This turned out to be one of the most successful tests of our stay in Sweden, with a very gradual heat drop off just needing a short boost from running the engine every few hours. The Webasto heating package that will be fitted to the vehicles in Antarctica should be able to provide such top ups on its own.

With the test programme complete it was just a matter of getting the D6N back over the hill, its blade off and loaded onto the truck using our bespoke ramp. It happened to be Spence who was the driver for this section. The candidate mechanics were also told that the formal selection activities were now concluded and it was just about getting home. The first run up the hill showed that the snow on sand combination was more of a challenge than we thought. A few runs later and it slowly dawned that we could have an issue on our hands. Spence was getting higher each time but the last lip was beyond the available traction. A discussion was held and we agreed that we would see if there was a less steep, but longer route back that didn’t mean wiping out any trees. Such a route presented itself and we got ready – it wouldn’t be long until it got dark. 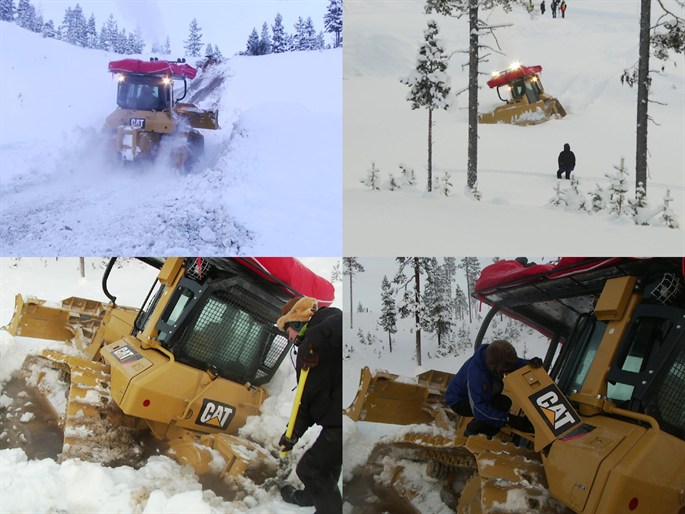 There was a flat run before the shallower slope on which people were positioned as way markers. The uncompressed snow made for slow progress until the vehicle eventually stopped and slowly started to lean to its right. Spence was revving the engine and looked to be trying to reverse out again but with no luck. The angle of lean was getting steeper. Spence was then spotted climbing out of the cab. As we all gravitated to the vehicle ready to mock Spence’s driving skills we saw that the D6N was sinking into ever deeper water and that water was already skinning over with a film of ice. The engine had stopped: the angle of dangle had prevented the remaining fuel in the tank from getting to the engine. First priority was to get some additional jerry cans of fuel into the tank to get the engine running and prevent the D6N from getting frozen in. Word quickly spread and the team from Perkins were soon on the scene. They always show up when there’s trouble – maybe it’s them. 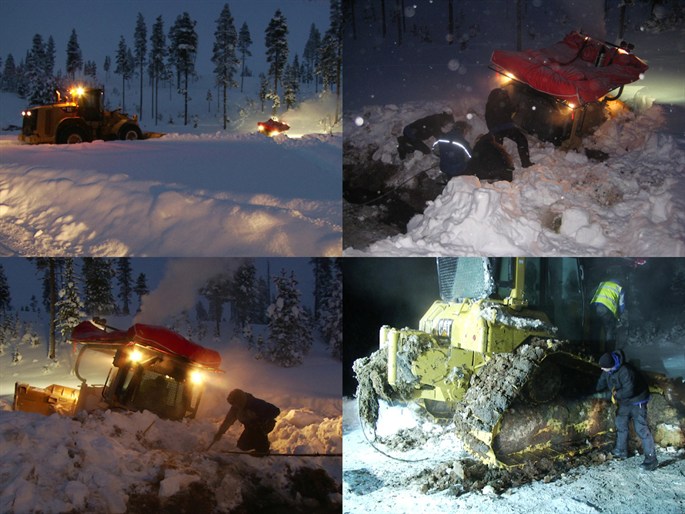 A long night in the ‘pond of doom’.

The D6N has a winch cable which had to be found and released from under the water. The route back out had no anchor points within range so a large earthmover was used. It cleared a path and then dug in its blade. The ground was just sand which was not the most secure anchor.

After clearing away as much snow and ice as we could from the rear of the D6N, the winch cable was locked around the blade of the earthmover. All spectators were moved well back – a winch cable under tension is potentially lethal. The winch was engaged, a lot of straining could be heard. Then the cable snapped. We were asking a lot of the cable and winch as the D6N has a system by which you have drive to the tracks or the winch but not both. This meant we could not assist the winch in any way.

Thankfully, where the cable had snapped it still left a good working amount. The earthmover was moved forward and dug in. We did all we could to ease the angle at the water’s edge and we tried again. In the dark with lights blazing, exhaust fumes (and steam) coming from the vehicle with the noise of the engine’s revving and metal stretching it all seemed surreal. Then the cable snapped again. There was now not enough working length left.

It was at this point that the guys from the Colmis facility said that they would need to call in ‘The Beast’ – a heavy-weight recovery truck that is used in Northern Sweden to pull trucks back onto the road when they have gone off into snow drifts or the forest.

Two hours later, ‘The Beast’ arrived. It didn’t bother with winch cables but had extremely large chains. This would be easy we all thought. Then one of the chains snapped. It was at this point that we were seriously beginning to think that we would be back in the Spring to get the D6N from the water. Some people started mapping out alternative career paths.

Multiple chains were then used and with a flourish the D6N was out. It looked a mess but was still functioning – and it was still on the wrong side of the hill. With the temperature having dropped further during the night we thought it might be worth having another go at Plan A. This would now be more solid than earlier in the day. It was determined that the most experienced operator from all those present was Brian from the Perkins team. One might assume that we would have pushed for one of the expedition team to do it but this was all about getting the job done and safely.

Brian did the business but was the first to admit that it had been borderline. That was enough for today.

Back at the house we had the last of our selection team daily meetings in the basement to discuss the progress and performance of our candidates. Although the ‘Pond of Doom’ had happened after we had formally ended the selection, we could not ignore any lessons learnt. Having such an event occur when people think they are finished can give a real insight to personalities.

The following morning, while the mechanics removed the D6N’s blade, cleaned the D6N and loaded it onto the transport, we spoke to the BBC crew and the Finning UK PR team. They had spent a week with our candidates and we wanted their opinions. Their comments were informative and much to our surprise their conclusions were the same as ours. We then bid them goodbye as they escaped to civilisation.

The rest of the expedition equipment was packed and the house cleaned as best we could with the gear in the way. We would be leaving the next morning. That night was a quiet one with a DVD on the projector.

Early the next morning the minibus went north through what had become very murky, blowy weather to get the marker for the Arctic Circle. Those who stayed at the house finished the cleaning and loaded Anton’s van. 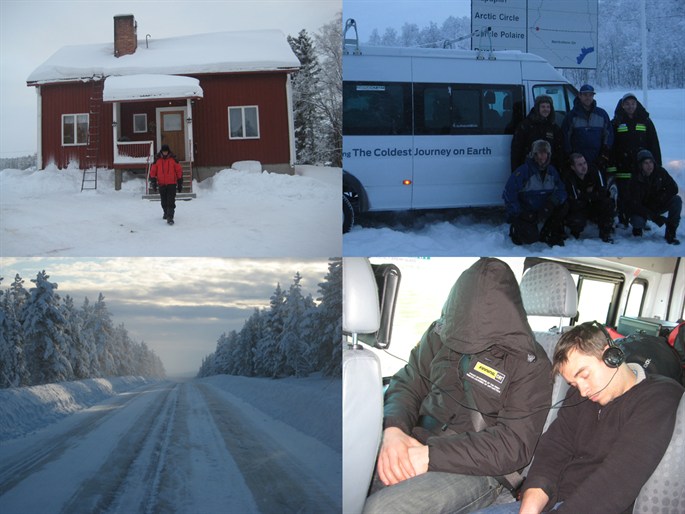 Clockwise from top left. Goodbye to Farholm. The Arctic Circle. Danny and Spence – alert as ever. The long road home.

Team photos at the Arctic Circle and getting the souvenir shop to open early. Back to Arjeplog, load up and head home. The journey back was to be split with an overnight stay on the outskirts of Stockholm. As we headed south, however, it was becoming clear that our progress in this weather was not going to let this happen. With some regret we rang the hotel and consigned ourselves to what turned out to be a 29-hour drive.

Back in Esbjerg there was just enough for Anton to have a trip into A&E at the local hospital. His blisters were now bursting and even though he would never show it he was in much pain. With his hands dressed and placed in bags with antibiotic cream he had a long ferry ride to look forward to. Early evening we made it onto the ferry. No lessons or presentations – just the bar to be entertained by a Johnny Cash/Elvis tribute act.

Next morning, with a grey sea out of the windows and variable amounts of sleep, Ran and Steve had the never welcome task of telling the candidates how they had done. Everyone had put in a huge effort so diplomacy and tact were called for. As is usual, it was Steve who had to deliver the bad news. Our successful candidates were Spence and Danny.

Back in Harwich, most of us kept well out of the way while Ran handed Anton back to the care of his family. “I wonder if she will let him out to play with Ran again?” someone quipped.

The British roads seemed so busy and Cannock couldn’t come quick enough. Eventually we made it back, unloaded and then headed our separate ways. Our Swedish Saga was now over.

At home Steve was met with the comment, “It got really cold while you were away – we had minus ten one day.”