In the build up to the Swedish trials we had been warned that it was unseasonably warm. The normal programme of car testing was being hindered as the ice on the lake was not getting thick enough; indeed there had been a fatality further along the lake during an investigation. In normal years the temperature could be expected to be around -18C. On our arrival it was about -15C which was far from ideal but would still help us get some useful test data. 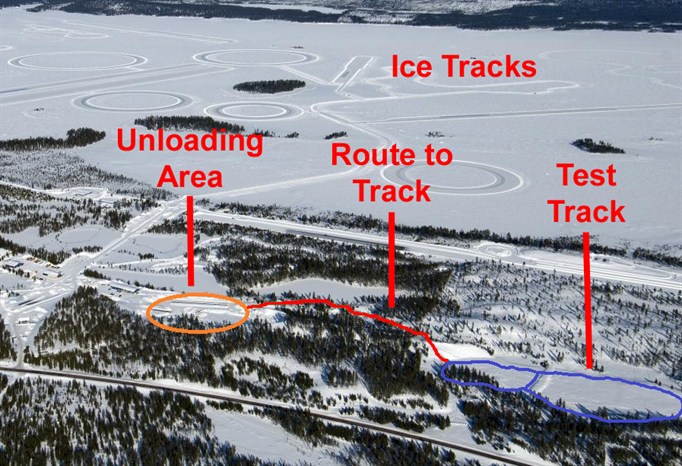 Having got the Caterpillar D6N and the ballasted trailer onto the test track we were at last ready to focus on our intended test programme. At this point we were joined by Mike Stroud and the BBC news team consisting of Matthew Price, with Julie Ritson on camera and producer Mark Georgiou. The BBC were given the upstairs ‘Penthouse Suite’ of our shared house with Mike joining Ran and Anton in the basement. With the addition of the Finning UK PR team filming and Geoff Long on the expedition’s own camera we had every angle covered.
The test track was compacted snow on underlying sand. We were unsure how the aggressive track pattern on the D6N would break this up. Concerned that we might only have one real chance to film the moving vehicle on a surface that looked right we carefully positioned the cameras for movement of the D6N and Lehmann sled. As it moved off we had reached a milestone in the programme. Thankfully the vehicle did not leave a trail of destruction making future filming much easier.

With D6N and trailer working well together we then introduced Ran, Mike, a pulk-sled and the Ground Penetrating Radar into the mix. This ‘Crevasse Detection Team’ moving in front of the vehicles would act as an early warning, hopefully far enough ahead that the direction of the vehicles could be changed to take a safer route. This test would give us a practical indication of what length of cable could be used to connect the GPR back to the vehicle. The display screen would be in the cab and the driver would make the call to Ran on what was being observed. 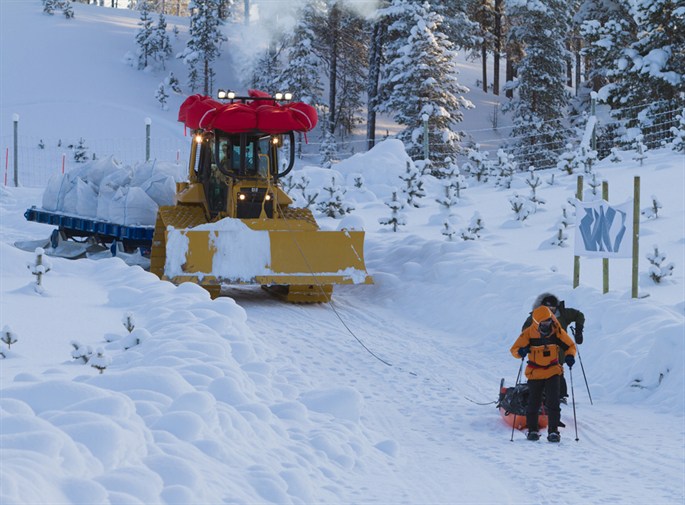 We had noticed during the day that the temperature was definitely on the way down. For loading and travelling purposes the D6N had some normal diesel on board with additive that would make it good to -28C. We also knew that the ‘local brew’ of fuel would work well for top-ups. The Finning team had also brought a selection of spare filters and other components. Practice on changing these would help develop cold weather practices and procedures. The temperature soon sunk past -28C and was well into the -30s by the time it got dark. We managed to film some of the sequences shown on the BBC News before the fuel in the D6N really started struggling. This had a major impact on our tests – we wanted to do some extended fuel burn runs at night when it was coldest but this swing from almost too warm to very cold caught out the whole town. The fuel filters and their spares were soon full of wax and the race was on to get the vehicle running again. From a mechanic selection point of view this was perfect. Rather than coming up with challenges and scenarios that put the candidates under pressure, Mother Nature was doing it all for us.

A cunning plan was devised. Andy Thomas, the Finning Project Engineer, would go with Craig Lusada, one of the candidates, and Anton to the nearest dealership to get some additional spare filters. This was a four-hour drive away. To be there when they opened the next morning would mean leaving at 4am. The remaining four candidates would work in pairs in shifts on the D6N. They devised a whole separate fuel supply through which local fuel was fed. This by-passed the first fuel filter and water separator and would keep the engine running. Slowly but surely the engine would feed warm surplus fuel through to the existing tank and melt the waxed fuel which could then be used. More local fuel was added directly to the tank to help prevent further waxing. 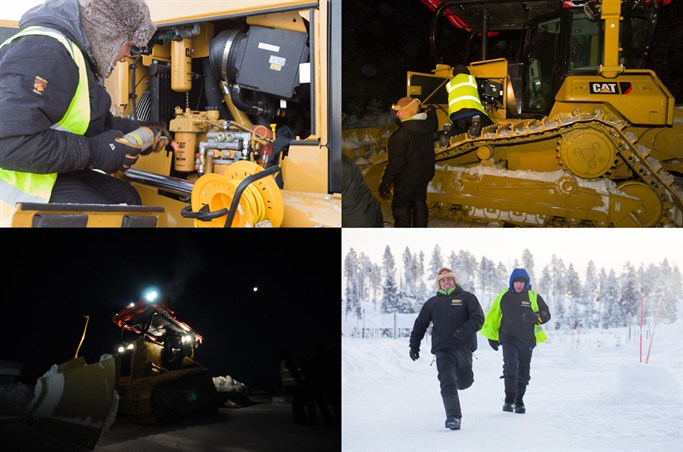 Keeping the D6N alive through the night, and a bit of morning exercise

During the night, the shift pattern was not strictly adhered to – the intentions were good but the need to stick to plans put in place for safety and the fact that this should be treated as a marathon and not a sprint had its consequences. In the morning the mechanics were assembled for a little group punishment – win together – lose together. We also made sure that everyone was there to witness it. They were asked to run a lap of the test track, not so easy in polar clothing and boots rated at -70C. The last one back would do it again. The actual purpose of this was not punishment at all, just an opportunity to see how they responded to the situation when they were cold, tired and, as far as they were concerned, had just performed miracles. They all did it. With what spirit they did it was as telling as we expected it to be.

The temperature had now settled at about -43C. It is hard to explain how this level of cold feels, it is more a presence that dominates almost everything you do – you can function but it takes more planning and consideration to do the simplest things. -43C is getting into the warmer end of what Ice Team will experience in the Antarctic, but was certainly good enough for our purposes. At lunchtime, Andy Thomas, Craig and Anton returned triumphant with some of the most expensive Caterpillar spares known to mankind.

The team now split to carry out different tasks. One group would concentrate on getting sponsor photographs; the clear blue skies and snow-drenched backdrop were ideal for this. In front of the camera would be Ran and Mike. Duty photographer was our co-expedition leader Anton Bowring. Supporting Anton and feeding through the sponsor patches was Tomo. In essence this is a simple procedure – the clothing had specific Velcro sections to help quickly change the patches. In these temperatures, however, everything just gets harder and slower. Anton’s camera was getting temperamental and needed him to manually adjust and coax it on regular intervals.

In the local garage we asked what the bold headline was on the newspaper. ‘Sweden Paralysed’ came back the answer. Not just us having fun then.

The bulk of the team were wearing clothing tested in the cold chamber and this was the first extended field trial. The feedback was positive with just a few issues on fitting over the boots for some people. Although our temperatures were now properly cold, it is worth noting that we were in a very still, calm bowl with no wind to contend with during our entire stay. In Antarctica this wind will add a whole other level of complexity for the simplest of operations. 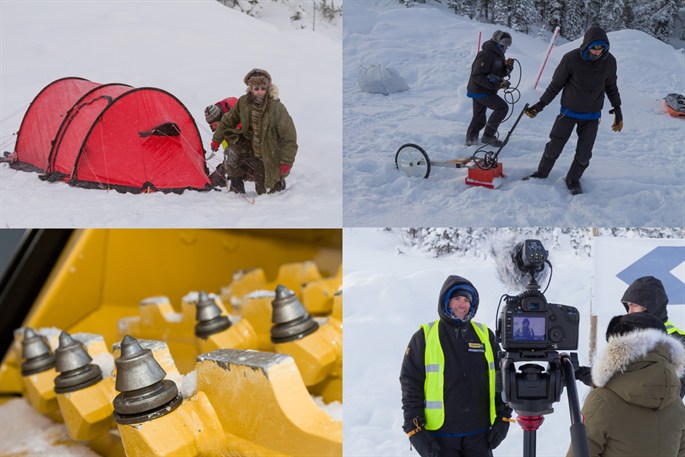 Clockwise from top left: Anton and Tomo set up the sponsor photo shoot, Geoff and Steve test the Ground Penetrating Radar, the team get in their screen tests, the D6N gets its claws fitted.

The D6N was now equipped and ready for its extended fuel burn testing and trundled around the test track giving all of our candidate mechanics some good driving time. Those not driving found plenty to do keeping the rest of the vehicle fleet operational. The vehicles were now left running 24 hours a day. From one of the vans Andy Thomas produced a cartridge of the neat additive that was to prevent the fuel from waxing – it was frozen solid.

From Antarctica the team will transmit data and video through the Iridium Openport satellite system. We took this system to Sweden: powered by one of the vehicles and connected to a laptop we transmitted a two-minute video package back to the BBC in London. The data rate on Openport is quite slow which gives you time to ponder the circumstances that lead to standing around in -43C by a frozen lake in Sweden, using a satellite network to talk to the BBC. On the expedition itself the cables to the Openport will be heavily insulated and protected. Here in the open, at this temperature, they were prone to snap under their own weight. 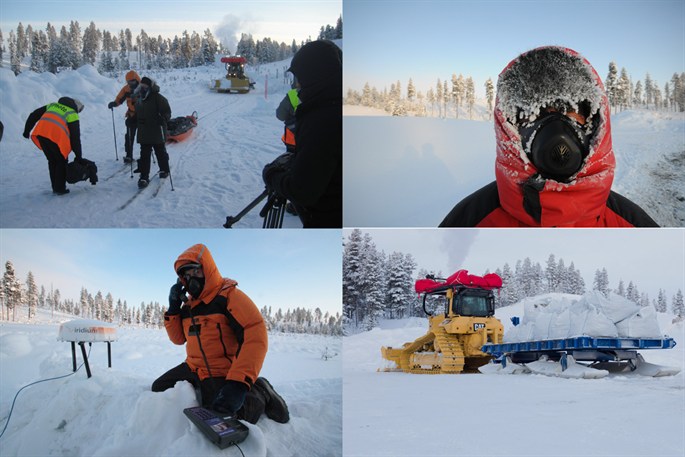 Our expedition co-leader Anton is one to focus on the task in hand. To constantly coax the stills camera into action he had to keep removing his gloves. Being the definition of stoic he didn’t happen to mention how cold his fingers were getting until they virtually stopped working. Tapping them together gave an ominous chinking sound. He was quickly despatched to medical aid and given pain killers. He was then ordered to stay in his luxury accommodation in the basement. Once the subject is raised it would seem that most people in the extreme cold have at some time ‘just finished’ the job they were doing and then suffered to varying degrees. The progress of his blisters over the next few days was the subject of much fascination. 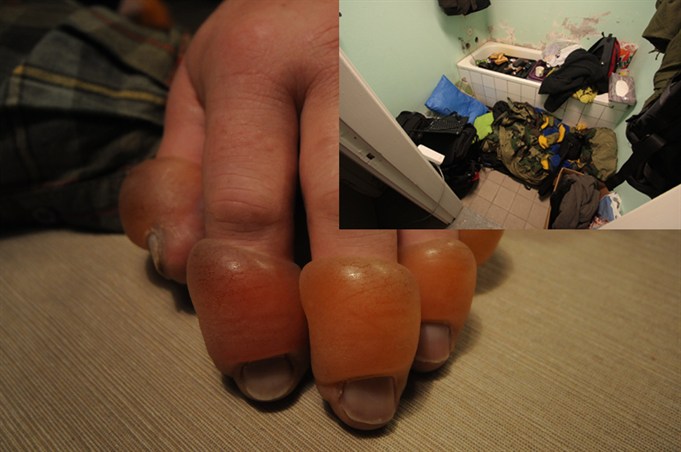 Anton’s account of ‘the case of the amazing fingers’

I first noticed I had a problem when my fingers stopped hurting. It was bitterly cold and my camera controls were freezing up. My nose was streaming which resulted in an icicle, like a stalactite, hanging from my nostrils. A corresponding stalagmite had taken up position on the shutter release which caused it to jam solid. I was wearing two pairs of gloves rather than mitts in order to adjust the controls but it was clear that I would have to take off one pair to keep up with the photographic demands. It wasn’t long before my fingers had gone completely white and solidified like stone. Luckily I wasn’t short of experience around me. Mike Stroud was very experienced in dealing with the effects of frostbite and Ran’s missing fingers were testament to the likely outcome if action wasn’t taken immediately. For three hours I squirmed in great discomfort with my fingers in lukewarm water as they slowly thawed and blistered. It held us all in horrified fascination. Tomo dressed the wounds and lent me his hands when I needed help. A salutary lesson was learned in temperatures which were mild compared to those the team could expect in Antarctica. It took three months for my fingers to reach anything like normality. For that entire period, the little finger on my right hand (which hadn’t been affected) was working overtime to perform tasks normally shared with its colleagues. To this day, it remains exhausted!

Despite the slow start, we were now achieving many of our aims for Sweden. The sponsor photography and filming for the BBC and Finning had taken longer than anticipated but the atmosphere was good and the cold had brought out the best in everyone. One last push and we would be done.

What could possibly go wrong?