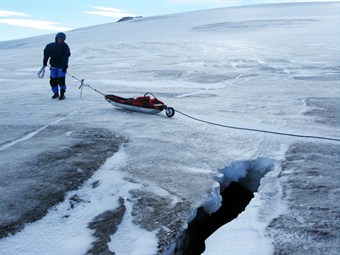 One of the biggest threats to the success of the expedition will be crevasses, which are a common feature of the Antarctic landscape. These cracks in the ice can be as little as a few millimetres to many metres across and they can be bridged by snow at the surface, making them very difficult to see. Falling into one could not only spell the end of the expedition, but would also put lives in jeopardy.

Normally when you are on a glacier you use your experience and look at the terrain and try to establish where crevassing is likely. You are looking for tensions within the ice such as convex slopes or areas where the sub glacial terrain is causing the ice to move at different speeds as the ice slowly creeps downhill.

During the dark months of winter we won’t have the benefit of long distance vision and we will be  within the pool of light from our vehicles and head torches so that makes the assessment more difficult. At the same time we have some heavy vehicles so what is passable by the skiers may not be enough for the rest of us.

As a consequence we are taking steps to manage and reduce the risk. This includes careful route choice where we can use the experience of others that have travelled before us. Precise navigation to ensure we don’t wander into known difficult areas and a strategy that should see us passing through the more challenging mountain areas, where there is likely to be more crevassing, outside of the totally dark period so we can benefit from the short daylight hours. 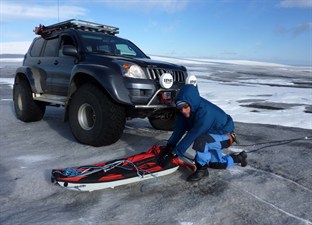 Another tool that we will be using is Ground Penetrating Radar. This is not new to the Antarctic and it has been used both scientifically and in a similar way to ourselves – to look for crevassing. In more normal applications it is used for ground survey work to detect subsurface structures such as pipes or cables and also for geophysical ground surveys.

In our situation the radar will be towed some 30m ahead of the vehicles by a skier. The data will then go back to the vehicle where the driver can see it on a screen and make an immediate assessment of what lies ahead.

It’s a complex bit of equipment but it is basically transmitting a signal down into the snow and then looking at what bounces back. What it exposes is a change of density within the snow pack – such as icy layers lying over powdery snow or, more dramatically, a large hole (crevasse) surrounded by snow – a big change in density.

What’s particularly difficult is to interpret what you are seeing on a flat screen to what is happening beneath you as its portraying 3-dimensional data on a 2-dimensional screen.

We needed some training. 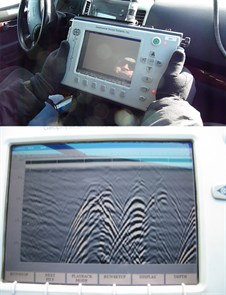 The equipment is being very kindly lent to us by Allied Associates – who have also been helping us to develop our heated clothing – and we had a very productive day training with them. Beyond the theory we started to use the equipment in domestic situations – car parks, gardens etc and it soon became apparent what a very useful tool it is. Experience is clearly key when it comes to the important interpretation of what you are seeing on the display.

In September 2012 I went to Iceland where we were helped by Arctic Trucks – an amazing outfit who are leading the way in modifying vehicles for use in Polar environments. They have used Ground Penetrating Radar extensively and very successfully for establishing overland routes in the Antarctic.

Gísli Jónsson of Arctic Trucks was a fine tutor and after sorting the equipment we went up onto the Langjokull – an icecap about two hours drive from Reykjavik.

It was a fantastic opportunity to use the Radar in crevassed terrain. Not only did it allow us to gain confidence in setting the various parameters to get the maximum performance from the equipment but it also gave us crucial experience in interpretting the data. Even at depths of 10 metres we were seeing quite small features within the ice and crevasses of only a few centimetres across were glaring obvious when approached at 90 degrees. Intepretation is more difficult when approaching the same crevasse at different angles.

It was a hugely worthwhile training visit.

The Ground Penetrating Radar will certainly feature on the journey and it will provide a very useful tool to be used alongside our other skills. It should give us early warning that we are entering disturbed terrain and our approach will always be to avoid rather than confront crevassing.