Posted by Hugh Bowring in News from HQ Progress Report on May 15, 2013 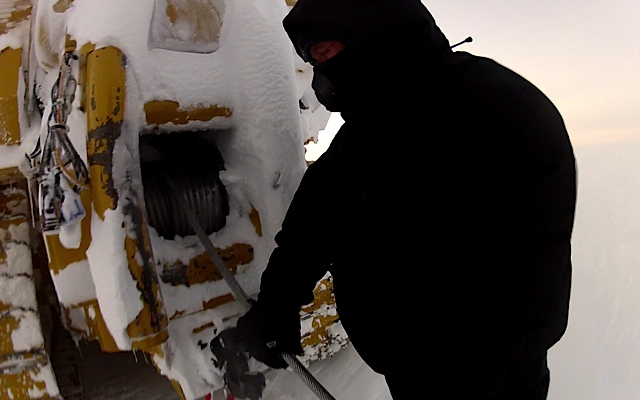 As you may have read yesterday, the team is currently winching back six fuel scoots which had become stranded beyond the reach of the Cats because of severe crevassing blocking their path. Yesterday, they pulled back two scoots, today they did the next two, and if all goes well, all six of the scoots will be alongside the Cats and cabooses by this time tomorrow, ready to head out of this horrible crevasse field to join the other scoots 5km away.

The reason why it is taking so long is because to reach the scoots from the Cats has involved the team having to link every wire, strop, tow rope and sling they have at their disposal to cover the 500m which separates the scoots from the machines. This has left the team with an improvised winch cable made up of about 20 different parts of varying lengths, and because the winch on the  Cat is only 50m, this means that every time the winch draws in its 50m length. the team have to unlink and remove 50m of the improvised winch cable, unreel the 50m Cat winch cable, reconnect and start the process all over again. Are you still with me? This is hard and heavy work which is not helped by the strong winds and blustering snow and the fact that there are crevasses all around them, although the minus 37C temp does keep the guys from overheating, so that’s a bonus!

Brian Newham believes that this might very well be the longest winch ever carried out in Antarctica, and given his experience of working on the continent I am certainly not going to argue with him. Of course we all accept that this might not be the record, but until we can discover anything to the contrary we’re feeling pretty confident. Mind you, this certainly wasn’t one of the records we had ever planned on breaking during this expedition!