The Blog / When the Going Gets Tough

When the Going Gets Tough

When the Going Gets Tough

Posted by Hugh Bowring in News from HQ Progress Report on April 16, 2013 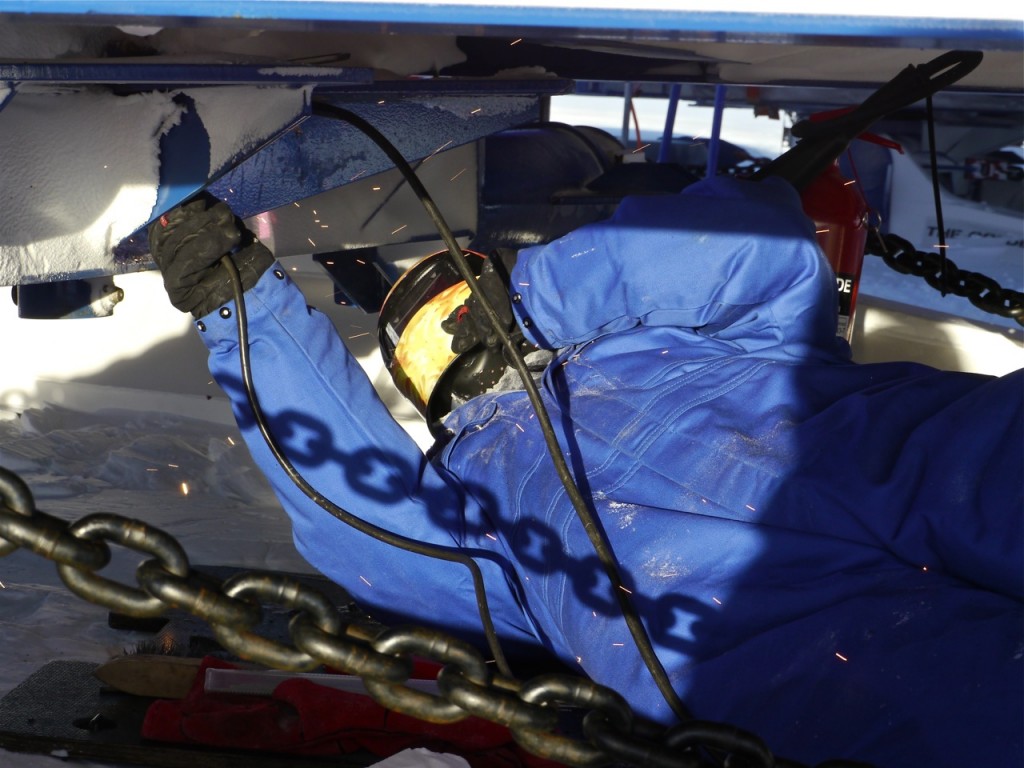 Ian welding under the living caboose – by Brian Newham.

The last week has proven to be a very testing time for the Ice Team as they have had to endure severe weather conditions and a series of mechanical set-backs. Taken individually these challenges would have been hard enough to deal with, but collectively they have put great pressure on the guys and have pushed them to their technical and physical limits as they have worked flat out on making the necessary modifications and repairs to continue The Coldest Journey.

The team’s troubles started when they reached the last section of blue ice which required ferrying small loads with both Cats pulling each one; the weather turned nasty and whilst the sub-30C temperatures were never an issue, the 50+knot winds and near zero visibility would have made crossing this treacherous stretch of ice suicidal. Ice Team Leader Brian Newham was forced to make the decision to sit out the blizzard and wait for a window of opportunity; but no sooner had this window arrived and the Cats warmed up and ready to go, that the winds picked up and the Ice Team were forced to take cover.

Regular followers will know that at last the weather did improve and the team made the final runs up to the fuel depot. The weather has remained good since then and this has given the team the chance to do an in-depth evaluation of the equipment. Unfortunately, this condition check has revealed some problems that have demanded immediate attention before the traverse can continue and which explains why the team has stayed put at the depot despite (frustratingly) excellent conditions for travel.

Among minor, everyday issues, it was found that one of the Cats had an electrical problem which rendered it unusable. As you can imagine, any faults that render either one of the Cats unusable is potentially a show-stopper for this expedition; so it is at times like these that you cry out for the world’s best Finning Caterpillar mechanics – and thankfully we have two of them in the form of Richmond and Spencer. Together, the duo worked tirelessly to identify the problem and I am very pleased to report that the fault – a broken wire in the midst of one of the wiring looms – has now been fully rectified. Nevertheless, this is a useful reminder of the continual threat of malfunction that the team has to operate with and which is expected to worsen as the conditions deteriorate.

Whilst the mechanics worked on the Cats the rest of the team turned their attention to other areas of the Ice Train, including the fuel scoots. We already knew from recent experience that the scoots that had been left at the depot would need modifications, the team having had to perform the changes to all the other scoots a few weeks ago,. What was cause for concern however, was that the portable generators – vital for making the modifications – were already struggling in the lower temperatures. This is by no means catastrophic – the Ice Team are nothing if they are not versatile and experts in contingency planning –and the boys came up trumps once again in getting the generators to work smoothly and carrying out all of modifications successfully yesterday; what it does mean, however, is that progress has once again been hindered.

The team have also found cracks in the front axle assembly of the living caboose sledge which are likely caused by  the large loads that have been going through them. They are currently working on reinforcing the affected area and devising a new way to change their towing system so that the load is imposed elsewhere. It is an issue which the team are confident they will be able to resolve for now, but nonetheless the axle will remain an on-going threat in the back of Brian and the rest of the team’s minds.

Bearing wind chill temperatures in the minus 50s, the team has got on with the job in hand and made excellent progress, and we congratulate them on their heroic efforts to tackle major obstacles – both environmental and mechanical.

What we can be certain of now is that more tests will follow.