The Blog / The Long and Winding Road

Posted by Hugh Bowring in News from HQ Team TCJ on March 2, 2013 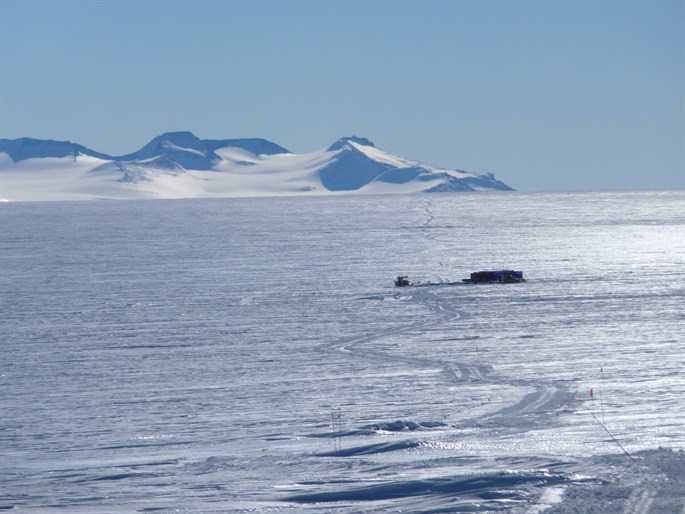 The Ice Team have been pinned in the same position since days before Ran left because of terrible whiteout conditions. The weather broke just long enough for Ran’s collection, but other than that progress has been all but non-existent. The current camp is poised at the bottom of an extremely difficult 7km-long section of terrain which demands reasonable conditions to assess and cross safely.

Although yesterday the winds were up at around 30knots most of the day giving the guys little choice but to sit it out once more, there was a brief period of lighter winds (20kts) during which Brian and Rob were able to do a skidoo recce of the terrain and a subsequent survey of parts of the route with the Ground Penetrating Radar. With an established sage route ahead, Richmond and Spencer then had just enough time to take a couple of fuel scoots up the plotted course with one Cat in front and the other behind. They got back to camp at 10pm in darkness.

Overnight camp was at S72 29′ 05.9″, E023 25′ 08.5″ and at an altitude of 2419m, the same as it has been for several days. The good news is that there is now a very reasonable chance of making some proper progress today. I was sent a very upbeat email from Brian this morning saying the weather was great and the best they have had for a week or more.

The Cats are ferrying loads as he wrote, with the second rotation of the day already underway. That was at 2.36pm their time, (12.26pm GMT) and they had just the two cabooses and a couple of Lehmann fuel sledges left to get up and over this very tricky terrain.

Once they are over this very challenging section the team will push on as far south as they can before having to turn back north for the start of the traverse in less than three weeks’ time.