Posted by Hugh Bowring in News from HQ Progress Report on October 24, 2013 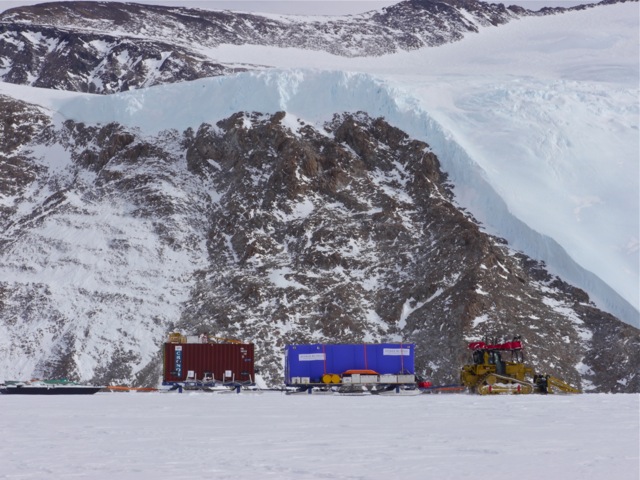 After a few well-earned rest days, the Ice Team got back on the move yesterday and are tonight at a new camp 5.6km along their destination north.

The Ice Team are heading for the Princess Elizabeth Research Station, and are hoping to arrive there by the end of the month. The intention will then be to fly out at the end of November, heading for Cape Town, South Africa, and then on to England.

If all goes to plan they will return to Africa on the same plane that will be bringing in research scientists for the start of their season. Of course, plane journeys to and from Antarctica are infrequent as it is, and flight plans are heavily affected by the weather; so we cannot say with any certainty that the Ice Team will leave then. But that is the intention, at any rate.

Before the team are willing to entertain too many thoughts of returning home they have a tricky passage to negotiate first. The new camp is now just a few hundred metres south of an area of known crevassing, which the team dubbed “The Valley of The Three Holes” on their journey south. It is a critical passage and so the team have done reconnaissance on foot this afternoon to ensure their safe crossing. Conditions permitting, they are planning an early start tomorrow with the aim of getting all four loads winched through by midday.

A quick question… If the team plans on flying away from the Princess Elizabeth Research Station at the end of November, what will happen with all the equipment, cabooses etc.? Are these being left in Antarctica?

Of course not – please pay attention to previous bloggs

Thank you for the reply, but as you can imagine there are a lot of posts to go through just to find this out and a simple answer would have been appreciated.

I believe that when conditions are favourable the SA Agulhas will return
They will then recover all the gear & reload it for a return sailing.

Thanks for the clarification.