The Blog / The Drivers: Answers

Posted by Hugh Bowring in Competitions From the Ice on April 1, 2013 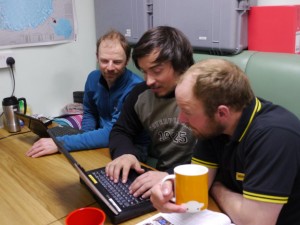 On Saturday, we asked you to come up with some questions for the two drivers, Spencer Smirl and Richmond Dykes. The most popular three were put to the guys and here is what they said:

Question One: If one or both of the Cats break down or are damaged beyond repair, what then?

If only one of the Cats has a crippling failure that renders it unmovable, we could possibly carry on without it. Dependi…ng on our location on the continent it might even be possible to bring the dead Cat along for the ride. If this failure occurs anywhere past the South Pole, the surviving D6 should be able to handle dragging the dead Cat and its share of the cargo to the finish line. However, if one of the Cats was to fail early on in our expedition, it, along with a large portion of our fuel, would have to be left behind.
If one of the Cats lies down before we make it back to our fuel deposit at 72.5 degrees south, then it would be highly unlikely we would be able to continue. Obviously, if we lose both Cats to catastrophic failure, we would be dead in the water as well; but we are fully equipped and mentally prepared to spend the winter buried in our cabooses next to two broken down Cats.
With the two D6Ns supplied by Caterpillar and modified by Finning, it is very unlikely these two bulldozers miss the boat home next year.

Question Two: What is the biggest repair you could carry out on the Cats in the environment you’re in?

We are equipped to manage a variety of above average field repairs. Although we have anticipated mostly engine problems due to the aviation fuel we are burning, we have also brought a large quantity of hydraulic components. If we were to have a massive failure in one of our hydraulic pumps or motors, this would likely be the most difficult repair we are geared up to deal with. We would likely have to spend the better part of a week disassembling various components within the hydraulic system, cleaning all the contamination introduced by the failure. Good thing the Cats came with their own drop down workshops!

Sir Ranulph Fiennes left so much chocolate behind when he departed a month ago we really don’t need the excuse of a holiday to indulge our sweet teeth. If the Easter Bunny was taking orders though I would definitely go for the hot cross buns.