The Blog / In the Name of Science – by Rob Lambert

In the Name of Science – by Rob Lambert

In the Name of Science – by Rob Lambert 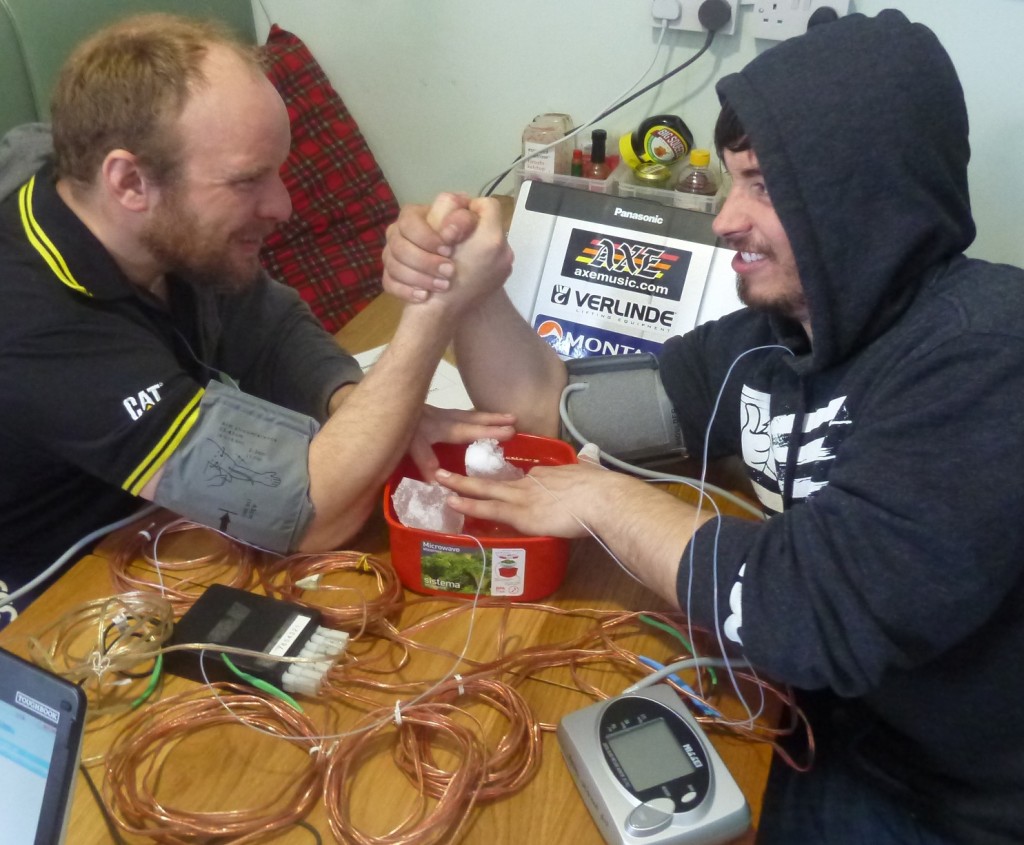 There are many things I love about being a doctor: there’s the simple, utter joy of working for the NHS; there’s the stratospherically high salary, share options, & company car; and of course there’s… that misty-eyed look of awe / admiration / lust that invariably appears on the face of pretty girls you meet at parties. At least I think that’s what it is. But, especially on expeditions like this, one of the very best things about it is the ability to inflict pain on your fellow travellers – all in the name of medical science of course.

The five* of us here form a small but very captive audience of guinea pigs, and our inability to escape is being fully exploited in a series of 16 different medical and psychological studies collectively known as the ‘White Mars’ research programme (so named as the cold, dark, and isolation of life in Antarctica is often seen as an analogue for space travel).

This follows a long tradition of scientific research on British expeditions in Antarctica, perhaps immortalised by Scott’s selfless commitment to science during his ill-fated 1912 South Pole expedition: he and his men continued to drag the heavy rock samples they collected en route even as they marched to their deaths, and Apsley Cherry-Garrard famously described his 1911 winter journey to collect Emperor penguin eggs at Cape Crozier in his book ‘The Worst Journey in the World’ (read it – it’s brilliant). One hundred years later, the British Antarctic Survey continues to conduct world class science around the continent to try to understand our planet a little better.

Our own efforts are much less extreme, but as we travel we will be collecting scientific data for several research institutions throughout the Commonwealth. As doc I have the dubious honour of conducting the medical studies, and on most days there is something on someone to prod, poke, or otherwise interfere with. One such project – in conjunction with The University of Roehampton – is to investigate what is known as cold-induced vasodilation. We all know that when we get cold our bodies reduce blood flow to our extremities, causing painful or numb fingers and toes. However, after a few minutes the blood flow to those same cold bits tends to increase again, before flipping between cycles of increasing and decreasing blood flow. This is cold-induced vasodilation – also known as the ‘hunting response’. Climbers and other folks who spend time in cold places will recognise something similar as the dreaded ‘hot aches’ or ‘screaming barfies’.

We still don’t fully understand how this happens, but the response to cold varies between different people (just ask Ran!). To study it more, every month the team will be plunging their digits into icy water for half an hour, whilst being wired up to various temperature probes and asked to rate their level of pain. Here we see Rich and Spence doing just that, whilst using the time-honoured tactic of arm wrestling to pass the time and take their minds off the freeze. Meanwhile Brian and Ian, their tests safely behind them, get to point and laugh at their howls of anguish. As medic, of course it would be deeply unprofessional for me to take any pleasure in their pain. But what Rich and Spence don’t know – but you now do – is that I made their water extra cold today: payback for Spence failing to bring me my usual cuppa in bed this morning.

We may be short on pretty girls down here, but being a medic does have its upsides sometimes. Although come to think of it, the last laugh may be on me: it’s my turn for the test tomorrow..

* Mary, of course, gets excused. No animal testing here..