The Blog / Welcome Back Boys!

Last night, following a wonderful dinner with our hosts, Brian and Lee-Anne Singer and their family, Ran, Jo and I retired to our rooms knowing that by dawn, the team should be in Cape Town. Earlier that evening I had been in touch with ALCI in whose Ilyushin aircraft our five colleagues were due to fly. Antarctic logistic arrangements are complicated and during this early period of the summer season there are many interests to satisfy. Scientists and their equipment are arriving daily. Others are leaving at the end of their tour of duty. Smaller, feeder aircraft ferry them back and forth from the Russian base at Novolazerevskaya (Novo) to national outposts belonging to Belgium, Germany, Japan, India, South Africa and the UK. In our case the team had been collected from the Belgian base, Princess Elisabeth, taken to Novo and, according to Vasily of ALCI were due to arrive in Cape Town around 07.30 in the morning. In the meantime, Prince Harry and his colleagues from the Walking With The Wounded South Pole Allied Challenge expedition were passing through Novo and flying on towards the Pole and the start of their 200-mile walk from 87 degrees South to the South Pole itself. This is frontier country and at this time of the year, every day extraordinary people are arriving and departing, each with their own inspiring stories to tell.

The staff at the Colosseum Hotel are faultless, friendly and very obliging. They had prepared press information and printed out travel plans for the following day and, by the time I went to bed, they had also arranged for a car to take Ran, Jo and me to the airport in time for the arrival. I set my alarm clock but, at 5 am, I was woken from deep and blissful sleep by a call from Vasily to say that the plane was now due to land soon after 6. I was quickly up and called Ran and Jo. To my amazement, breakfast was waiting for us and following a quick bite and strong coffee, we were on our way in Donny’s minibus through the empty early-morning streets.  A glimpse at our website told me that, according to blogger, Lorraine Best, the giant Ilyushin aircraft had just landed. She had commented 5 minutes earlier that “It was a beautiful sight coming over the house“. Were we too late? Would we miss the moment they passed out of immigration control into the arrivals hall? I wanted to photograph it. We sped on past two sleepy police cars and swung into the airport concourse. The place was virtually deserted and, when we got to the gate, only a solitary photographer from the South African Sunday Times was standing by, camera in hand.

More coffee. It seems that, even from Antarctica, immigration procedures are essential and it was a half hour or thereabouts before first Ian and then, one by one, Brian, Rob, Spencer and Richmond unceremoniously drifted into the hall with laden trollies looking, for all the world, like any other travellers. It took a moment or two to register the situation, then greetings were exchanged and in an instant, all those months in the cold and dark were brought to a close and the busy everyday life that most of us take for granted, closed in and swallowed up the five hapless travellers. It is a shock to the system when the demands of society carry you along at an unexpected pace. There’s money to change; Which way do we go to get out of here? Beware – “Slippery floor when wet”; Someone asks – “You need a porter?”. Outside there are busses, taxis, and questions, lots of questions. “How does it feel to be back?” “What are you going to do next?”. It will take a while to adjust. Lee-Anne has offered the guys hair cuts and massages at the Colosseum Hotel – a well-earned pampering. It will be refreshing and it will soften the landing. Then, in half an hour we have a press conference and lunch. After that, who knows? Perhaps a bit of shopping or there’s a cinema just around the corner then out to supper? Suddenly, that longed for return to the old routines becomes a somewhat mixed blessing. But, one thing is for sure, they will all profoundly enjoy returning to their families and friends. Welcome home boys! 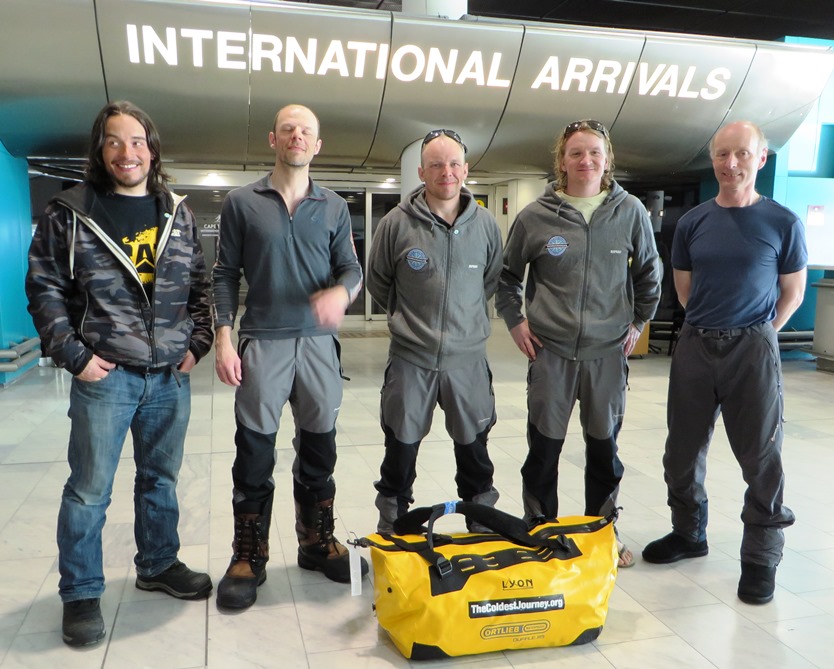 cool nice boys how long was you out there for?
and plus boys is it nice to be back in London?
so I hope you enjoy your journey in the Antarctica

Although they go no more advancing into the darkest night, their hearts are still & strong for now, but their skin is just as white.

Hey, I am almost sure I have seen the guy on the left getting off a plane at YEG from Diavik?
He looked almost as happy too.
welcome back all of you,

Thank you so much for letting the world share in your amazing adventure. I have loved following your journey and I have enormous respect for the work that you have done. I have always wanted to travel to Antarctica, but I will never have the courage or tenacity to do it as you have done. Extremely well done gentlemen. Enjoy your holidays with your families.

Back on solid ground! Wishing you a safe onward journey. Enjoy your holiday with your families. Years in the making, almost a year from when the Alghus sailed. Thank you for the inspiration, thank you for sharing your adventure. In that I include all those at HQ who seem to have worked equally long hours.
Debra Hargreaves. St. Mary’s Newton Aycliffe

I just looked through the Cat pics on Flickr. I do not think any of us realised, from the comfort of our armchairs, just how bad it was out there. Full marks for the attempt. And full marks for being sensible enough to know when enough was enough.
You will all have stories to tell. I hope we will get the chance to hear them.

I’m so happy you are home safely now. Iwondered a lot about you while i was following you in my warm bed every night. Many thanks for sharing moments of this tremendous expedition and overcoming difficulties to stay alive. Look forward to hearing your stories. Love and greetings from izmir (Turkey)