The Blog / “The Last Night” – by Anton Bowring

Posted by Hugh Bowring in Team TCJ on February 4, 2013 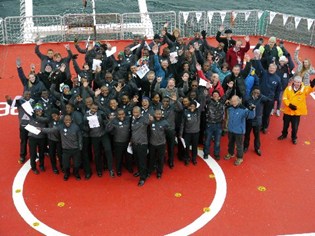 Yesterday [Saturday] saw the culmination of all the outstanding tasks which we, on the ship, had to perform. The last drums were unloaded; debris and unwanted equipment were taken back to the ship from the Ice Group’s stout encampment hal…f way up the hill; last minute items were transferred back and forth until there was really nothing else that we could do. Last on board was our trusty vehicle ‘Snowflake’. The timing was perfect. Work finished in the late afternoon and before long, the Ice Group were welcomed on board for one last evening.

The cadets wanted to sing a farewell. On the helideck they turned out in their stylish Montane wind sheeters. Before long they were chanting their song and stamping their feet in an extraordinary and beautiful rhythm with the ice cliffs behind them and the low sun casting long shadows. There was even a flake or two of snow. Following the song, they presented Ran with a signed montage of photos surrounded by all their signatures. At the bottom is said “Thank you for letting us be part of the adventure” and “GOOD LUCK on THE COLDEST JOURNEY!” For quite a while Ran was focus of attention as all the cadets queued to be photographed with him. During the voyage, I had produced certificates signed by Ran and myself, which stated that each named cadet was a bona fide member of the expedition. They were thrilled. We were thrilled. I took a group photograph of the cadets together with the expedition team, Cap’n Dave and some of the crew. Then it was time for the banquet. We were hungry and extraordinarily cheerful.
Mogamat and his team had performed their magic again. We started with Salmon Canapi Nervi followed by Noodle Soup. The entrée was Prawn Curry & Roti. This was followed by Beef Fillet & Pepper Sauce, Dutches Potatoes and Mint Peas. Pudding was Chiffon Pancakes. A culinary sensation washed down with a selection of wines. We were now even more cheerful. Cap’n Dave made a speech and wished the expedition team good fortune. Ran made a speech and thanked Cap’n Dave, the crew, the cadets and all the expedition support team. Mike Stroud spoke about the beginnings of this great venture and read the original messages between himself and Ran when he suggested the first walk across Antarctica in winter. And I said that, having worked for five years on the project, I was almost bust and I had got frost bite in Sweden – and I was only the administrator! I did wish them good luck too and said that I was very happy to be returning to English spring weather. Was that the right thing to say? In retrospect, I think probably not. But I don’t suppose anyone was listening.
After we had eaten, Cap’n Dave asked the catering team to come out from behind their cauldrons and sizzling grills. A great cheer went up and there was much applause. Apart from being great chefs, they are great people. Everyone on the ship is a great person. It is a great ship. I’m sure that any rats in the bilges are great rats too. The fact is that, now the job was done and the celebrating was in full swing, even a cockroach would have been handed a certificate and welcomed to the team. We were all loving it. There was much back-patting and handshaking to confirm that we had done the job well.
It was as if Mother Nature was our hostess. As we left the dining room and made our way to the Officers’ Lounge to resume the bonhomie with a game of cards and a last gathering, the low sun stuck great fingers of light along the ice shelf and made a rare spectacle that is uniquely Antarctic. The dark sky and the yellowed cliffs of ice reflected in the still dark waters of the bay. And then, like the finale to a firework display, the sun burst through the cloud right over the sturdy camp ashore and filled everything with golden light. Phew! What a way to go. And go we must.
Today [Sunday], after breakfast, the Ice Group will step off the ship for the last time and make Antarctica truly their home. At noon, when all are ready, the ship will turn her bows to the north and steam gently away. Now, all focus is on our six friends and their long journey ahead. The story, at last, properly becomes theirs.
Best wishes,
Ant