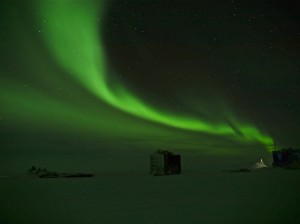 Before the answers, a note on the picture: Rob thought people would prefer this stunning picture he took of the aurora rather than his own face. Thanks Rob, we do!! (this bit was NOT written by Joanna – she would have loved a pic of Rob!)

1.  What was your favourite subject at school?

Not really a subject, but gymnastics, athletics, and rugby were the things I enjoyed the most. Academically, it’s a toss-up between physics and Latin. I was reasonably good at both, and my physics master was an inspiring man, but my Latin teacher in my early teens was young, female, and attractive…

It was a Renault 14 in shining metallic gold -a thing of rare and subtle beauty. I inherited it from my Mum and somehow managed to crash it into an entirely predictable wall while I was learning to drive.

3.  When were you last afraid?

I used to work for a charity removing landmines and unexploded ordnance, and the first time I defused an anti-tank mine gave me some nervous moments. I can’t remember any real fear since then, maybe some twitchy moments while climbing. Although every time I watch Wales play rugby I’m petrified that we’re going to somehow mess it up! You certainly wouldn’t want your kids to hear me in those last ten nervous minutes. Years of watching desperate performances, though it’s getting better..

4.  What is your favourite band/music/composer?

5.  Are you superstitious? Do you have a mascot or lucky charm?

I’m not superstitious, but I have a thing for the number 9, which was my shirt number playing rugby. I do have some mascots with me here, which are for my godchildren when I get home (shhh!).

6.  What was you earliest ambition?

To be an astronaut! Isn’t everybody’s?

7.  What is your biggest extravagance?

I’m not really into gadgets and things, and I try not to have too much ‘stuff’, although I confess to treating myself to a little sports / hairdresser’s car a few years ago. I do love to travel though, which I guess is my biggest extravagance.

8.  What has been your greatest disappointment?

Sadly, this expedition. I was expecting so much more.

9.  If your ten year old self could see you now, what would he think?

What on earth have you been playing at for the last 29 years?? And why aren’t you an astronaut?

10.  If you lost everything tomorrow what would you do?

Start again. A line from ‘If’ springs to mind…

I’m no gym bunny, but I like to have the odd run or game of squash every now and then, and traipsing up mountains certainly helps. I guess I’m lucky to be able to stay fairly naturally fit – I blame my genes..

I’ve always thought that happiness is determined not by where you are, but by who you’re with. Paradise is pointless if the company’s not great. On the other hand, even in the grimmest of spots, with decent people by my side I’m a happy chappy. (Mind you, for pure location-based happiness, a British crag in the evening sunshine is hard to beat..)

13.  What was the first journey away from your home?

I’m not quite sure! When I was two my family moved to Zambia for a couple of years, which provides my earliest memories. My first solo trip was, I think, a flight to Dublin aged 7 to visit family friends. It was tremendously exciting getting on a plane without my parents, and back then you could still go up into the cockpit, which was awesome.

14.  Who in history would you have liked to meet and why?

Leonardo da Vinci. What a guy! Second is probably a toss-up between Edmund Blackadder and Harry Flashman…

15.  How do you think the expedition will be remembered?

Hopefully, as having raised some serious money for Seeing is Believing. Whether it will or not is largely down to our patient followers! We’re not really in the entertainment business, so if you’ve enjoyed following us, please give some thought to donating to this life-changing cause.

16.  What do you like the most, and the least, about living in the Antarctic?

I love the stark beauty, the silence, and the way that life is reduced to the simple basics: water, shelter, and food. There’s not much that I dislike about Antarctica itself, although some greenery would be nice sometimes!

My godchildren’s giggling (hello Emma, Georgie, and Jamie!), and the ability to have a face-to-face chat with my friends and family. We’re very lucky to be able to call home on the sat-phone, but it would be great to be with them in person.

18.  Do you think you will ever go back to the Antarctic?

I’d love to, but opportunities are few and far between. Who knows what the future may hold though..

Rich is definitely our masterchef, the undisputed Heston Blumenthal of the frying pan. One of his inventions has been custard ice cream, which went down very well, and I’m really looking forward to one of his famous Ulster frys when we get home. Bri often has weather observations to do at dinner time, but he serves up a mean lasagne. Spencer often needs some help from Ian, but his meals turn out fine. To be honest, the meals are all so well thought-out and easy that even a culinary klutz like me can produce a passable pesto pasta chicken (try saying that with your mouth full..)

20.  What is the most beautiful thing you’ve seen since arriving in Crown Bay in January?

Well, there was a very cute girl who came to Crown Bay on the ship with us! Since then, the Aurora Australis (southern lights) which we were treated to a few weeks ago was pretty special. Great streaks of green across the starlit sky, it’s one of the things I’d been really hoping to see here.

Normally when I’m travelling the thing that I most crave is fresh bread; a few days without it and I’ll walk for hours to get to a bakery, or a friendly local with an oven. But we’re so lucky to be able to make fresh bread every day here, and the rest of the food is far better than I would have hoped for. I’m a huge seafood fan, so that will probably be the first thing I go for when we leave here. Scallops, mussels, and king prawns in Cape Town – mmmm!

22.  You have said before that raising money for Seeing is Believing was as important to you as crossing Antarctica. What is it about the charity that appeals to you so much?

There are many good causes in life. But (perhaps heresy for a doctor!), in this crowded world I’ve always thought that we should devote most of our energies to increasing people’s quality of life, rather than its quantity. Blindness has an enormous impact on individuals, families, and whole communities, but with comparatively little effort and money we can literally turn lives around. We don’t have to wait for new research, and in terms of ‘bang for your buck’ I can’t think of many better causes. If you could see the look on someone’s face as the eye bandages are removed and they see for the first time, I know you’d agree with me.

23.  You have just come through a three-month night. That’s hard to imagine. Can you explain what that is like?

It’s no big deal, to be honest. Plenty of people living inside the Arctic Circle have this every year, and our sunless time here has only been slightly longer than I had last winter at Rothera (BAS research station on the Antarctic peninsula), as we’re not that much further south. Even when we can’t see the sun, we’ve had plenty of twilight to keep us going. One of the great things about it are the almost unending, incredibly beautiful skies of red and gold as the sun flirts with the horizon for hours – magical stuff.

24. If you ever got another chance to cross the Antarctic in winter, would you do it and why?

Of course, I have a score to settle now!

25.  What do you do to unwind after a hard day at the office?

In the summer, hopefully I’ll steal a cheeky evening’s climbing at the nearest crag. When it’s no time to be outside on a grim winter’s night, it’s time to indulge in some good food, company, and the odd glass of vino..

26.  Which three words best describe your experience during this expedition?

In the words of the great Vinnie Jones: “It’s been emotional.”