This is the third and final post in our series of summaries by scientists behind The Coldest Journey’s many research projects. Over several months ahead we will be periodically producing some of the key findings of the results from the very many scientific tests undertaken during The Coldest Journey. Although the Ice Team’s story is soon to be wrapped up, please continue to visit our website and Facebook site for updates and news on the science.

As we all know, snow is frozen water and water Cheap Pandora Bracelets at the molecular level is made up of oxygen and hydrogen atoms.  As it turns out, there are different kinds, or isotopes, of oxygen and hydrogen atoms – some are just slightly heavier than others (owing to an extra neutron).  Unlike other radioactive isotopes, the isotopes of oxygen and hydrogen are stable and do not decay radioactively. This small weight difference between isotopes of oxygen or hydrogen results in measurable differences in the weights of the water molecules that make up snow.  By carefully measuring the numbers of “heavy” and “light water molecules, scientists learn about the origin of the water that ultimately falls as snow in Antarctica and indirectly, about the air temperature when the snow crystals were formed.  This connection between numbers of heavy and light isotopes and air temperature was recognized in the 1960s, and is still used today to study the climate in the polar regions.

In Antarctica, researchers over the past 30 years have built up a database of the stable isotopes in snow.  In the map, each dot represents a different measurement.  As you can see, the measurements collected in this project will fill in a hole in the map, and add to our collective knowledge about how temperature and archangelartifacts stable isotopes in snow are related. 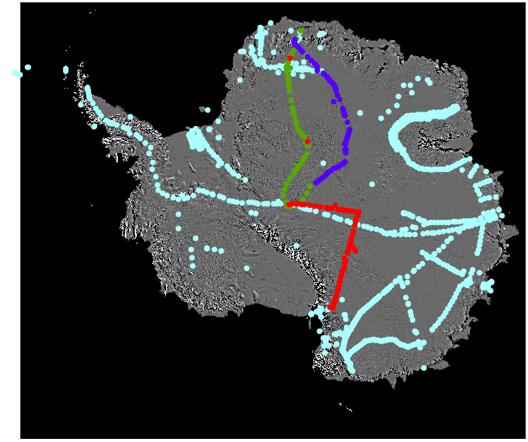 Hi, Brian, just to let you know that we have been regularly monitoring your progress and are glad that the safe return to base is in sight .
We have been visiting our family in Singapore and Tokyo and they all send you their best wishes and are looking forward to seeing you again.
Our holiday with Jo and your old man in Greece was a huge success; hope you can join us next time we go !!
Just to round off, I’m wondering what is worse; 32*C all day, 26*C all night with 100% humidity
[ Singapore] or minus 30-50*C where you’ve been; it will be an interesting point for discussion!
Stay safe, and good fortune.
Love from Jocelyn and Clive.