The Blog / Now and next

Posted by Hugh Bowring in Team TCJ on December 2, 2013

Now that the expedition team members are back home, the process of debriefing and processing their experiences for the scientists and schools is under way, and efforts to publicise the marvellous work of SiB continue. Inevitably, the day-to-day story is now less compelling although we shall continue to publish further reports as the final chapter unfolds in the months ahead.

On Wednesday night, the team with Ran but without Ian (who is relaxing for a few more days in Cape Town) attended the annual Transglobe Expedition Trust evening at the Royal Geographical Society in London. Their presence was something of a surprise for the audience of 800 who were there to hear the amazing Bear Grylls and Ran in conversation, as well as the truly inspirational Geoff Holt MBE who, despite being paralysed from the chest down, has sailed solo around Britain and crossed the Atlantic. The line up was completed by caver/diver Chris Jewell who reported on his seven-week expedition to Mexico and the deepest cave system in the Western Hemisphere. Ran, Brian, Rob, Spencer and Richmond answered questions (see picture) posed by the evening’s host and compere, Anton Bowring. The audience were fascinated to hear stories from the intrepid Ice Team accompanied with photos and film of their experiences over the past 11 months. 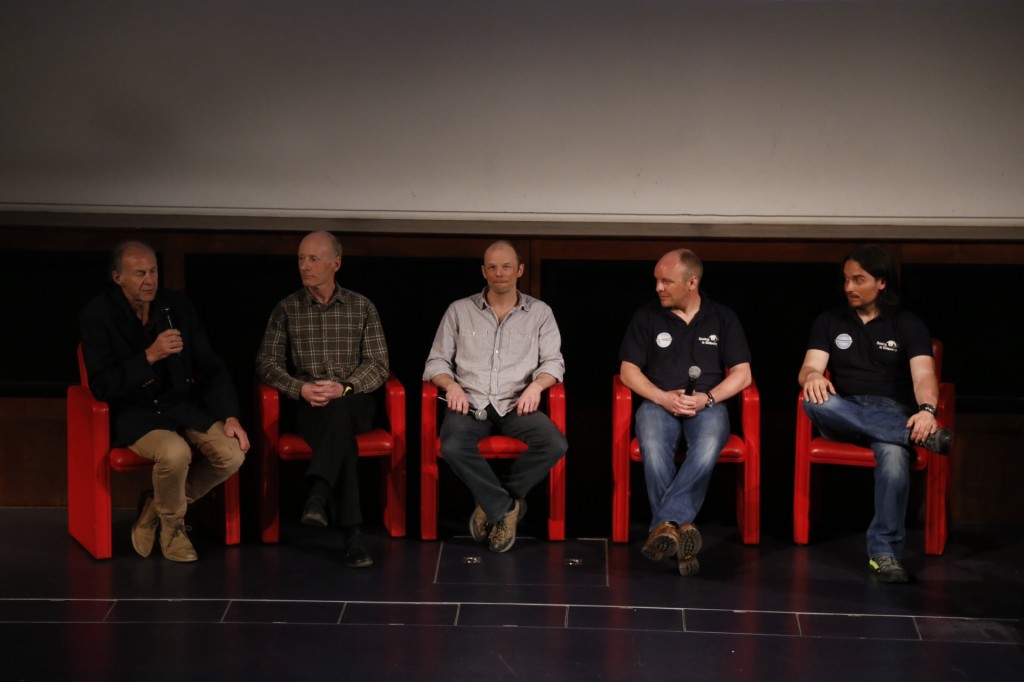 The Transglobe Expedition Trust was established following the success of the Transglobe Expedition 1979 -1982, the first longitudinal circumnavigation of the world via both North and South Poles on land, sea and ice. In the words of the expedition’s patron, HRH The Prince of Wales, the three-year journey, led by Ran Fiennes, was “Mad but Marvellous”! Today the trust exists to raise funds and award grants to people undertaking extraordinary and challenging projects which, when completed, push the boundaries of human achievement to new horizons. Successful applicants have included Ed Stafford who, for over 800 days, walked from the Pacific to the Atlantic over the Andes and along the entire length of the Amazon. Felicity Aston was the first woman to ski across Antarctica solo. David and Katherine Lowrie recently completed a 6,000 mile (10,000 kms) journey running the length of South America. Sarah Outen, last week awarded an MBE, is currently halfway on her journey ‘London to London via the World’ – a bicycle, kayak and rowboat expedition. So far she has kayaked from London to Holland, bicycled across Europe and Asia to China, kayaked from China to Japan and rowed the Pacific from Japan to Alaska! Next, Sarah will cycle across North America and then row the Atlantic back to London. These are all remarkable achievements. Some are in the public eye, some are not.

In the months ahead, we plan to re-shape and modernise the Transglobe Expedition Trust website and, thus, continue to enthral you with the extraordinary stories of the projects we are supporting. As with The Coldest Journey, we shall enable discussion and comment via social media. We have learned much from our experiences over the past year and believe that the opportunity exists to provide a unique insight into the amazing achievements of people who set out to break new records, study the world through the collection of data, interact with schools and communities and support the work of charities, much as we have been doing (and continue to do) with The Coldest Journey and Seeing is Believing .

Currently, the Transglobe Expedition website is somewhat dated and an archive of past adventures. However, work on it is well underway with the wonderful support of web designers, Infotex (who produced this website).  Soon it will be bustling with activity. We hope you will tune in and join us as you have over the past year. Details will be posted on The Coldest Journey website and Facebook page and on the existing Transglobe Expedition website www.transglobe-expedition.org.

We look forward to seeing you soon at our new address and to encouraging  you to follow and participate in expeditions which follow the “Mad but Marvellous” tradition.

It was my privilege to meet the team in Cape Town a week ago. My thoughts have been racing – so what challenge can I undertake ?- I know, I thought, what about traveling through England or, now this is a biggie, what about going to the Antarctic but not to The Pole? Such inspiration but how to harness the excitement and energy? I have Secondary Progressive Multiple Sclerosis and use an electric wheelchair and need a hoist to get to bed. But with mega-planning, Superlative Adventures do await. I will snatch my life from the mischievous beast MS. The Coldest Journey has been a huge inspiration. It has jolted me from the enveloping, stifling rug that threatens every day to snuff the dream to do something magnificent. But what Adventure … ah just wait and see!

I unfortunately wasn’t able to watch the live stream of the ice team’s press conference a few days ago, nor was I able to attend the event above. Are there plans to make any recorded video available?