The ship “Discovery” was built especially for the expedition at a cost of £51,000 (£4.1 m today). Amongst the crew was Ernest Shackleton, designated as third lieutenant in charge of holds, stores, provisions and deep sea water analysis.

On reaching Antarctica to start the expedition, the Discovery made its way to McMurdo sound where winter quarters were established. Many trips were made by manhaul and dog sledge parties in the remaining months before winter darkness fell. The expedition was made of many “projects” both scientific and exploratory performed by various combinations of the personnel. Scientific results covered extensive ground in biology, zoology, geology, meteorology and magnetism.

The centrepiece of the expedition was an attempt to reach the South Pole or at least to explore further South than anyone had managed to do previously. The core party was of Scott, Edward Wilson and Shackleton supported by others who were to lay food and supply depots for the team to use particularly on the return journey. In this way the men would only need to carry enough supplies as to last them as long as the next depot rather than for the whole outward and return journeys.

On 30th December 1902 having reached 82°17’S the team took the decision to turn back. They had travelled 300 miles farther south than anyone before them and were only 480 statute miles from the Pole. It took them just over another month before they reached their base, as Scott put it “We are as near spent as three persons can be”. In total they had been gone for ninety-three days and had covered 960 statute miles.

The Discovery Expedition was a landmark in British Antarctic exploration history. After its return home it was celebrated as a success, despite having needed an expensive relief mission to free Discovery and its crew from the ice.

Just like The Coldest Journey’s expedition has many important sponsors, so too did the Discovery. The Discovery expedition benefited from significant commercial sponsorship: Colman’s provided mustard and flour, Cadbury’s gave 3,500 lb (1,600 kg) of cocoa & chocolate, Jaeger gave a 40% discount on special clothing, and Bird’s (baking powders), Bovril (beef extract) and others all made significant contributions. 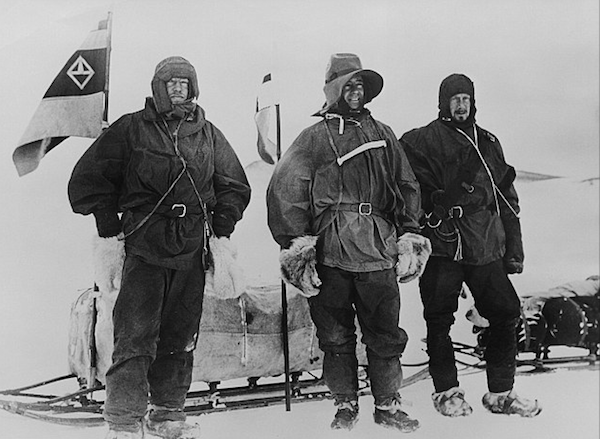