The Ice Team are this evening flying back to the UK. Complying with the wishes of Ice Team Leader Brian Newham, we can now release these pictures of Cats in tricky places, which give more of an idea of the tough challenges the team and their equipment faced on the traverse. Brian had asked us not to post them until the team were safely out of Antarctica – and away from any big holes – out of respect for the team’s family members who might not have been able to get another wink of sleep if they could see for themselves the dangers the team sometimes faced.

It is testament to the team of engineers at Finning that no-one was hurt during the expedition – or any Cats lost. The machines had undergone numerous specialised modifications, such as the crevasse arm and escape hatch, which helped to ensure that after falling into a crevasse, that the boys were safe and could exit the machine without being put in any unnecessary risk. As well as that, both D6Ns were modified to ensure that if one did fall into a crevasse, as you can see here, the other machine could recover the ‘fallen’ machine safely. Under no circumstances could a machine be left in a crevasse! Each time this occurred the Ice Team worked wonders with the assistance of the support of specially trained Finning Cat engineers in the UK.

But if you think these pictures look scary, imagine them in the dark! 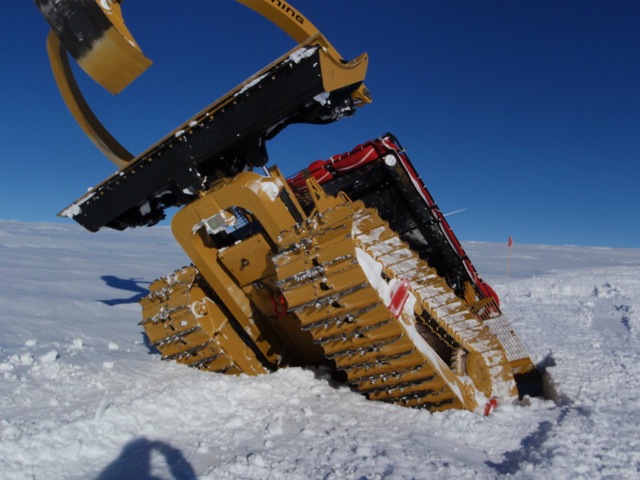 I do not think any of us realised, from the comfort of our armchairs, just how bad it was out there. Full marks for the attempt. And full marks for being sensible enough to know when enough was enough.

You all are heros. Period

Amazing pictures that reflect a little bit of the challenges encountered.
just a question. will all equipment be removed from Antarctica, or will it be used by scientists and stations in Antarctica? sorry if this issue has been addressed before, but i have missed a few months…