The Blog / Antarctica Proves a Dangerous Place for One Expedition Member

(Words and photographs by Jill Bowring)

Mary, much to her chagrin, was banned by everyone from going ashore – it was just far too dangerous. There were fuel pumps that she could have been sucked up by and put into a flubber; there were Caterpillars , tractors, snow cats, skidoos, sledges and scoots, all of which co…uld have run over her. There were cardboard boxes, metal boxes and wooden ones too – she could have fallen into any of those. And the cabooses had to be commissioned so that they were snug and warm.

Then there was the cold (but not as cold as in the UK) and the snow – neither too bad in themselves, but there are deep blue crevasses she could have fallen into.

So, she has been mooching about on the ship, checking the stores going ashore. She noticed that there were 40 boxes of food included and checked one of them out. It was all chicken curry, which is not something she likes at all. I have found her gathering provisions for her own hamper together. She went to the galley and found some cheese, then I saw her in the pantry moving some ginger biscuits (I wondered who had been eating them), and finally she discovered a store of chocolate.

Yesterday and today she has been fairly panicky, we have been stuck out in the bay because the pack ice is too thick for us to get into the landing place, but the Ice team have had their first nights ashore. Mary is terrified of being forgotten and

left on board when the ship sails. The last photo I will send you was taken a few minutes ago, she is still there – holding onto the little derrick’s hook, with her sleeping box with red flannel, her kit bag, and her hamper of food waiting nearby.

It is hoped that we might be able to get in to the ice shelf this afternoon but we’ll just have to wait and see. 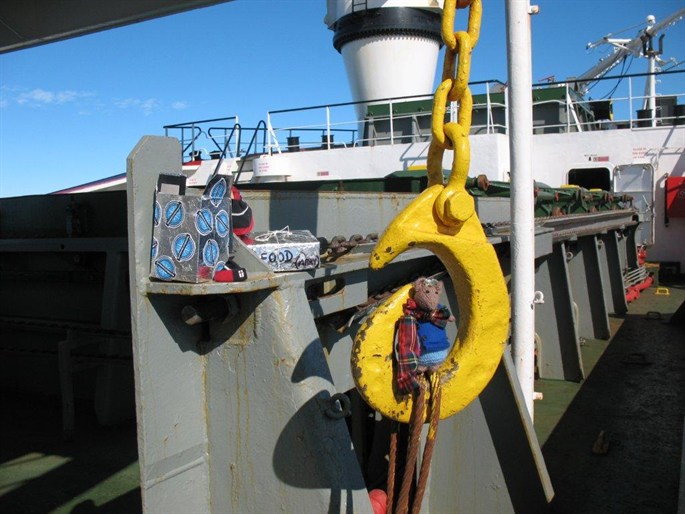