The Blog / What a Snotter 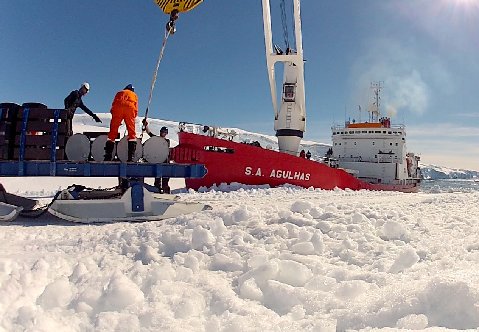 I’m an optimist. If I see a half glass of beer, I’ll drink it. Today turned out to be half a day. In my book it was a good one. Others were frustrated that we didn’t achieve more.

There was still a swell but cautiously we nosed into the shelf at 07.30 and started work. Large lumps of ice fell into the sea around us but the loading platform stayed firm and the first sledge of drums was soon being loaded. The big problem was the crane. You can see it is massive and, this morning, as the hull rose and fell in the swell the hook was hard to control with the sort of accuracy needed to preserve life. To overcome the problem, Cap’n Dave ordered a “Snotter” to be fitted to the hook. This is a length of rope with a smaller hook on the end (I suppose you could say that it hangs from the big hook like a drip on the end of your nose – hence the name!). In effect it means that, instead of being hit on the head by a massive lump of steel, you have your skull shattered by a smaller one – a mallet rather than a sledge hammer. So, hard hats on and off to work we go.

The Ice Group have their own agenda. Theirs is a busy schedule. They are setting out the fuel scoots to try a test pull with the Caterpillars. This is critical. The whole project depends on the ability of the two Cats to pull nearly 80 tons each. On paper it looked possible. On ice, no one could be sure. But that was their problem. Ours was to move the last 227 drums of fuel from the ship’s hold up to the depot lines in readiness for future use. Eric, Glynn, Adrian and Geoff were assigned the task of “dodging the Snotter” and loading the swaying drums, four at a time onto the sledge. Mike and Thea Stroud took up position on the foredeck to keep a beady eye on the ice shelf on either side of the hull to check for cracks in the ice which might cause a collapse and threaten the loading platform and those on it.

The ship shuddered from time to time as the swell pushed us into the ‘V’ section we had made on initial impact. But she’s a sturdy ship and Cap’n Dave is highly experienced and wisely cautious. Unloading got underway and before long, with great skill Justin, the crane driver, had a full sledge of 40 drums which was making its way up towards the depot lines behind ‘Snowflake’. And so the day continued.

The Ice Group came on board at lunch time to collect their personal belongings from their cabins. They joined us for fish and chips (it is Friday). It was a lively and cheerful gathering. Everyone seemed buoyant and exchanged news as if we hadn’t seen each other for months. Then it was back to work. But, due to the distribution of manpower, progress with unloading was slow. Another sledge of 40 drums was taken up the hill but, by mid-afternoon, the swell was creating a potentially dangerous situation and reluctantly it was agreed that unloading should stop. Nevertheless, I consider it a successful day. No one was hurt – no broken bones or battered heads and 80 drums safely laid out at the depot lines. The only injury that I could see was, as we pulled away from the shelf, the ice was smudged in red paint as if our ship had suffered a nosebleed. What a snotter indeed.