Posted by Hugh Bowring in From the Ice Progress Report on October 3, 2013 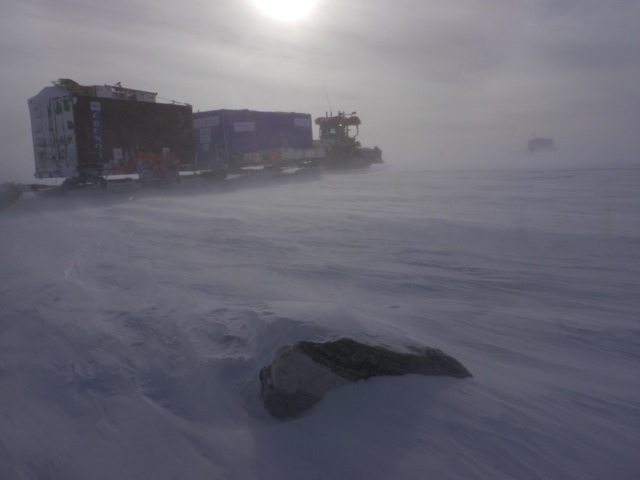 An almost cloudless start to the day but it quickly invaded from the east. The wind came and went and with it the drift, but overall it was a good day for travel.

The first couple of kilometres were across blue ice, so for the most part we had to double-head with both Cats pulling each of the four loads. Once we were past that and got onto a firm snow surface the Cats could move independently and we made good progress across the plateau. Several kilometres later we passed through a narrow and distinct band of granite rock boulders lying on the surface. By their angular appearance I would suggest they have been transported on the surface of the glacier, rather than within its depths, so somewhere upstream there must be a granite rock exposure.

We camped having travelled just over 6km but there was enough time left in the day to return for the two loads of fuel scoots and to leapfrog them a few kilometres ahead of camp. It will give us a good start tomorrow.

Onwards is the word.

[This update was written yesterday. The reasonable conditions did not last long this morning but the team were able to move the caboose units 3.3km north to join the fuel scoots which were moved ahead late yesterday. All loads are now in the same place. Further movement halted due to poor visibility.]

Is it possible for you to post the GPS co-ordinates on a daily basis (to display your route more clearly) or only when The Train has Stopped?