Posted by Hugh Bowring in From the Ice Team TCJ on February 9, 2013 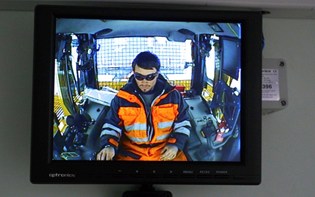 The first successful day of travel finally happened. Well, not completely successful, but just about.

Yesterday was Thursday the 7th of February. It was our 18th day on the Antarctic continent. Long days spent unloading and assembling our massive amount of kit. The sun never stopped shining and the temperature didn’t spend much time below zero. The struggles of coping with missing kit, equipment growing pains and a difficult fit and finish would have been a lot more difficult to bare, had we had to do it at -20C with a 50-knot wind. Thank the ice gods that wasn’t the case.

Last night we finished our final checks of the Cat D6N tractors, cleaned up all our rubbish and stowed the cabooses for travel. It must have been near 8 or 9 at night when Ian reminded us all of the frozen cheese, bacon and fillet steaks we had buried 6-feet under snow in an attempt to keep it frozen. It was too late to dig it up, we were all exhausted from what we hoped was our last hard day of labour for a few days. We added it to our list of pre-departure chores, which already included loading our two snow mobiles, and the knocking loose and connection of our magnificent Ice Trains.

The snowmobiles, which had to be lifted with a Finning Crevasse Boom, a devise bespoke to these two Antarctic tractors, needed to be hoisted nearly three meters high to where they would perch on top of 40 drums of jet fuel sitting atop a Lehmann sledge. This would be their home for the majority of our 300-mile depot run to the plateau. As for the connecting of the train, I can honestly say that backing up a 20-tonne sledge unit, sitting on top of four articulating ice skies, at over five meters wide, is definitely the hardest reverse into a hitch I have ever done. The worst of it is that the skies pack a path in the snow so if you have misjudged your line backwards it is near impossible to create a new one.

At last, we had finally got to a point of readiness for departure, vibrating with excitement, exhausted from anticipation of our epic trek to finally commence. “Lunch time” I looked at my Cat watch donated to me by Cat Merchandise; “Rats” I said when it turned out to be 10 minutes to twelve. I scoffed down my soup and canned fish as fast as possible and impatiently twitched in my seat as I waited for the rest of the guys to finish. Back outside, I climbed into the cockpit of the D6 for what seemed like the first time. We all gave the okay on the radio and I began to pull away. The mega Ice Train lurched to life behind me. The tracks would slip in the snow beneath me, twitching like a nervous feline with every increase to the load as the slack in the undercarriage was taken up. We were finally moving.

The last year of my life had been building up to this moment: racing 80 tonnes of metal, machine and medicine at 5km/h across the barren white that is Antarctica. I looked down at my Cat watch again: 1.30pm. I had a permanent grin stretched across my face. My I-pod struggled to make more noise than the rattle of the tracks as we tugged along. I didn’t mind. I was just happy to have some tunes.

I watched the speed listed on my Garmin GPS unit slowly start to decline from 6km/h all the way to 2km/h. I heard the turbo spin up to speed. I knew what was next. The slope ahead of us was barely noticeable to the eye, but to 80 tonnes it was ginormous. I had spun out. All the excitement washed out of me as a wave of despair crept in. It was 1.50pm. We had only made it just over a kilometre in 20 minutes and we were stuck. If we had to start relaying the load now, we would never complete our expedition: we would run out of time and fuel. We had a team huddle and agreed to leave three fuel scoots alongside this slope in hope that the 25 tonnes we were deducting would make the difference needed to have us on our way. After an hour and a half of moving spare parts around in the holds of the fuel scoots and re-rigging our tow assemblies for the reduced configuration, we were once again on our way. We pawed our way south across the ice at an average of 5.5km/h for three and a half hours. We managed to travel 18kms and drank 300liters of fuel between the Cats. It wasn’t a complete success right away because we had to leave some scoots, but it was a huge success in the end because we were within our fuel limits and the machines had a problem-free day. I hope there are many more to come.