The Blog / The Beast is Purring – by Spencer Smirl 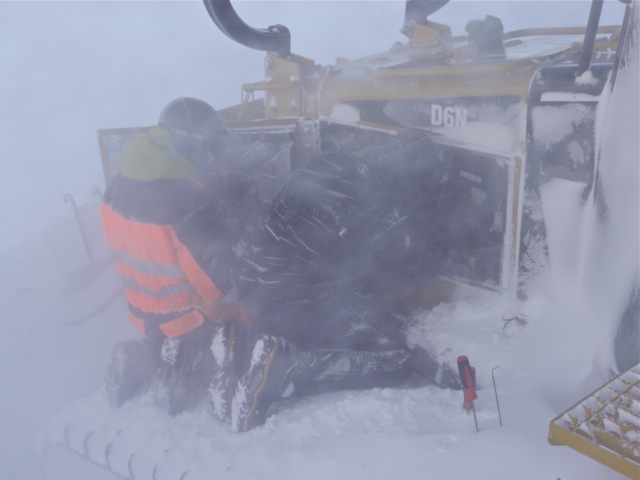 After almost 100 days of hibernating beneath a mountain of snow at temperatures as low as -55C, it is difficult to anticipate a trouble-free start-up of any machine, regardless of how much time, money and effort has been devoted to preparing the equipment for operating in such an extreme environment.

On Saturday we began the epic dig. Disappointingly, as soon as we had cleared all the snow in and around Seeker, the weather turned and you could barely see from one end of the machine to the other. We would have to postpone start up.

Today (Tuesday) the wind has slowed slightly, but more importantly, the cloud cover has past and the spin drift has dissipated. This has allowed for bright sunshine to pierce its way through. It is much easier to convince yourself to work in wind chills approaching -70C when you can feel the warmth of the sun on your back.

Although only two days had gone past since our initial dig, there was a fair amount of snow to re-remove. After a few hours of tossing snow we were ready to start the pre-heat systems. The first is the Webasto heater that heats the coolant and circulates it through every system on the machine apart from the transmission. The Webasto fired up straight away and within minutes you could detect heat at the hydraulic and fuel tank heat probes, a good sign that there is no blockage or air in the system. As the heat from the Webasto began warming the various bits of the D6N, Richmond and I continued removing snow from the internal compartments of the machine. The more snow you remove before it has a chance to melt the better. Dry snow is much easier to remove than blocks of solid ice, especially when it encases fragile components such as wiring harnesses.

After three hours had past, it was time to light the secondary pre-heat system. This system uses several electric heating pads strategically placed at various locations around the machine. The electricity borrowed from the caboose generator to run these pads is equivalent to four kettles.  With an air temperature of -42C and a wind speed of approximately 30knots (35mph), the chill was still very intense. Everything on the machines was very stiff and although I was very excited to have my Cat almost up and running, I was also a little nervous.

Although we had been pre-heating for almost five hours I was still amazed and very relieved when our Cat D6N fired up instantly with the first crank of the key. Several hours have now past since Seeker first purred to life. I have since tested all the implement systems and not a single fault code or fluid leak has occurred. My face is a little sore from the constant grinning.

After supper I am going to go break Seeker free of the icy grip below and begin clearing snow around camp. It is crucial that we operate long enough and hard enough that we melt all the snow accumulation out of the machine before we shut it down.  I don’t think this will be a problem as there are tonnes of snow to clear around camp. 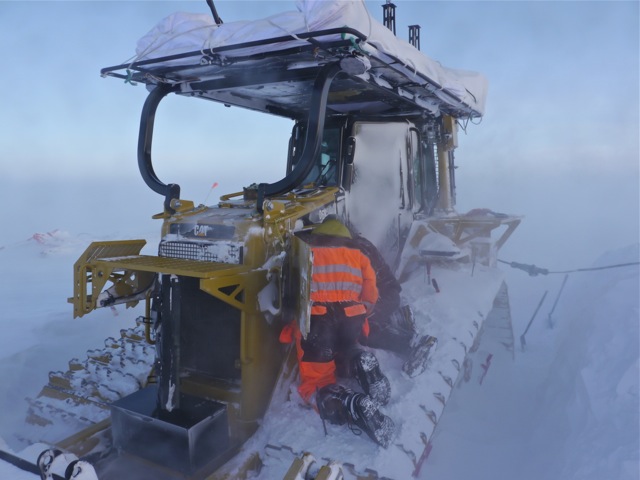