The Blog / Testing the Fuel Scoots

The first blog from Richmond Dykes…ever.

Yesterday was the first day since unloading the ship of the fuel drums and pumping them into the flubbers that have had time to do anything with the fuel scoots. The day started off by checking over and warming up the Cats before work commenced; Ran, Ian, Spencer and myself then proceeded to unpack all the ropes that were supplied and laid them out on the ground to figure out the size and the configuration of the hitch-up arrangement.

The scoots have been arranged on the ice in a straight line twenty feet apart with marker flags at the left hand front corner of each scoot to mark their position if a snow storm blows in. Our next job was to free each scoot from the icy floor individually by lifting them with the crevasse arm of the D6N then pushing them forward one meter. After the scoots were freed we towed them one by one into a 3-3-1 configuration, then pulled the main drawbar into place across the front of the three first scoots.

Ran and Ian threaded all the ropes through each of the scoots from the drawbar at the front to the single scoot at the rear with shackles and purpose-built retaining pins and plates. This left a single rig ready to move on our test pull with an estimated test pull weight of 60 to 65 tons. The Cat D6N was put into gear 1.5 and full rpm of 2250 and took up the slack at speed. The ropes are of a dynamic design and their construction allows you to pull the scoots at speed and stretch the ropes before the pull is transferred to the scoots; this gives a kinetic energy effect that snaps the scoots loose and pulls the first three followed by the second three followed by the single scoot at the rear. 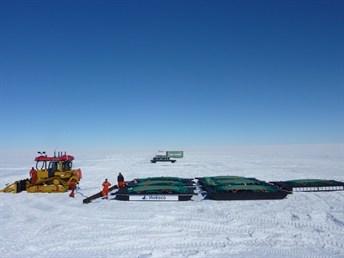 Success! The load moved with ease. However, when l proceeded to do a circle with about 150 yards radius, I noticed as we turned the corner that a build-up of snow was accumulating in front of the drawbar as the bar was not high enough above the ice. This build-up probably equated to about two tons, hence adding to our train weight which was not desired or necessary. After discussing the issue over a cup of tea with the whole team, a new build and improvisation plan was conceived and put into effect. This meant stripping down some of the original build and removing the drawbar and configuring some of the ropes in a different way.

A second pull of the scoot rig made vast differences in the pull quality and a complete lack of snow build-up with the removal of the drawbar. We carried on with a few laps, taking various reads from the on-board computer, such as engine, transmission, coolant and hydraulic temperatures. The engine was working at 72% load which will change very little when the caboose is hitched up weighing an extra 15 tons.

Today will involve setting up the second scoot rig and further fit out of the cabooses with a further sort out of the parts and hydraulic hoses.

Hope you are all enjoying the daily blogs. This is my first one since leave England – but it certainly will not be my last! Please send Hugh a few words of encouragement for getting this one out of me, whilst checking that he has not fainted from shock