The Blog / Over the Hill by Brian Newham

Posted by Hugh Bowring in From the Ice Progress Report on September 29, 2013

Fortunately the very strong winds that we had yesterday eased during the night to a more moderate 30 knots and that was enough to allow us to start the GPR survey of the route ahead. This is a badly crevassed area but thankfully many of the bridges that we built on our southbound journey we found were still intact. By lunchtime we had surveyed up and over the hill and  identified a few more areas that needed attention before we felt comfortable enough to take loads across. 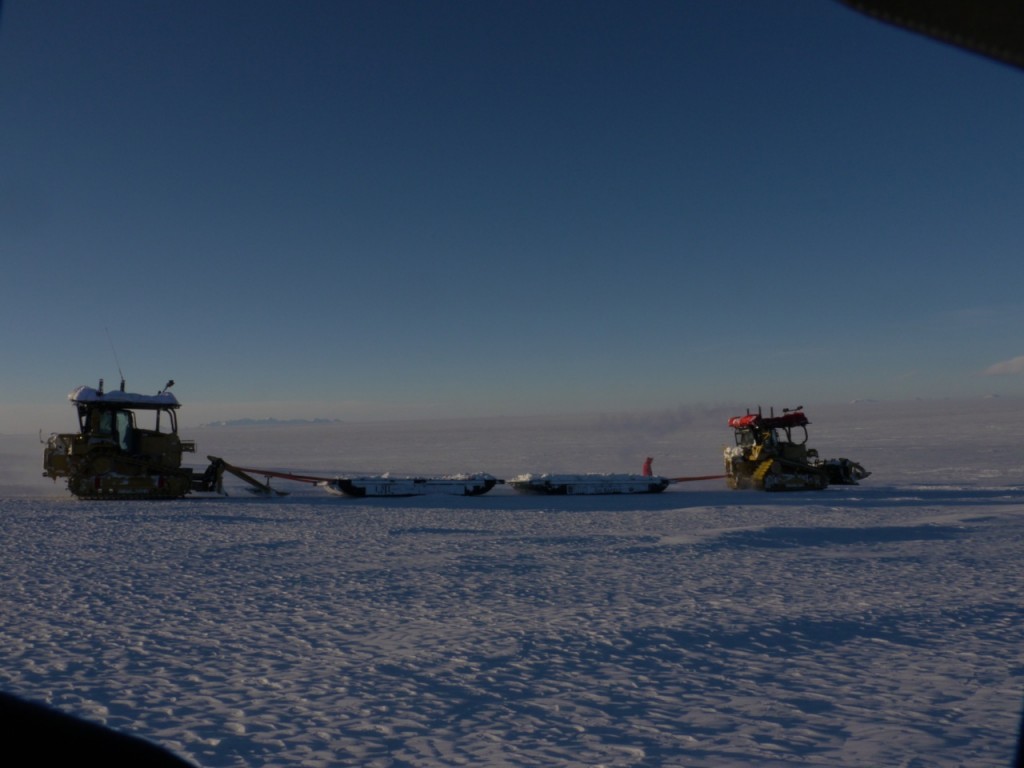 During the afternoon we winched fuel scoots slowly up the hill – numerous crevasses to cross but their direction is uniform and predictable, so we made good progress. Crossing the brow of the hill was more concerning as the crevassing was well hidden and very random in direction. Despite the GPR survey we still opened up a few surprise holes but avoided anything worryingly large. The descent on the far side of the hill is moderately steep so we reduced our loads to just two fuel scoots and had one Cat pulling and the other Cat acting as a brake behind. It’s a good system but obviously the small loads mean we have to make more journeys which is always a bit of a dilemma.

By mid-afternoon the wind had dropped further, the drift subsided and we had great views of the mountains to the north and the large plateau which will lead us to them. It was a brief respite and by dusk the wind was back up to 30 knots but by then we were dropping off the last of the eight scoots which we got over the hill.

A productive day and we made the best of the conditions, but we will need to keep our wits about us as we move the remaining scoots and cabooses.

I can’t believe this web site is still up. Don’t you feel like a bunch of frauds?

You make it sound like they’re basking in the sun having fun. Have you any idea, as you sit comfortably at your computer, of the serious danger these men are in, surrounded by crevasses which could swallow them up at any moment? You are seemingly unaware of the scientific and educational aspects of the expedition, not to mention the substantial amount of money they have raised for the charity Seeing is Believing.

Wow, Antarctica has its first troll!

Good luck with the final loads. Just one thought. What happens to all the equipment when you reach the coast. Where will it be stored for later collection?

Congratulations! Hope those winch cables hold up to their duties for the rest of your journey. Keep moving, slowly North and all will be well. As of always, best wishes

That’s very handy being able to reuse the bridges. Have you been able to see any of your inbound tracks or are you relying totally on GPS/GPR? Also, has there been any noticeable movement in the ice sheet since you last passed by? I.e. Ice bridges moving position by a metre or so? Keep it up guys.