The Blog / Off Ice – by Anton Bowring

It has been a frustrating day. In my report yesterday I made a foolish comment about being irritatingly smug on account of the fine weather. Well, today, all that changed. The wind swung round to the north east overnight and pressed all the sea ice into the bay. This meant that, on the ship, we could only look at the tiny black dots, our Ice Group, on the distant shore and wonder how they were getting on. For us there was nothing practical that we could do to help them. For some, it was an opportunity to rest; for others it was deeply frustrating. Either way, the elements, as usual, were in charge.

For once, I am probably the only one who has a lot of work to do. While the Ice Group and support team were busy over the past few days, I have been plodding on with administrative duties. While they were ‘on ice’, I was the ‘off-ice’ worker. Today, my duties included resolving the question of how to ship all the surplus expedition equipment and Snowflake back to Britain. I also sent a photo of Ran with a chocolate bar to a potential sponsor, organised cadets to talk to the BBC and a South African breakfast radio show, considered fuel arrangements with our Belgian friends, discussed with the captain a new system for accounting for the nights and meals that we enjoy on the ship and a myriad of other tasks including e-mailing numerous expedition contacts, supporters and colleagues.

The Ice Group spent the night in their caboose and have otherwise been hard at work sorting out their accommodation, mending and improving various functions and ancillaries of the installed equipment and attending to numerous tasks. It was very good to speak to Spencer this morning and Brian later this afternoon and to hear that, apart from teething troubles, everything is going to plan. Our three Belgian friends Kristoff, Walter and David are still parked nearby and have been a great help again today.

Jill has been backing-up (copying) onto memory cards hours of film material that she, Geoff, Spencer and others have taken over the past few days. Between them, over the past weeks, they have covered most aspects of life from the flying fish of the tropics to setting out the depot lines on the ice shelf. Every action seems to have been covered from every angle with Panasonic cameras, Go Pro cameras, Sennheiser microphones with their shaggy Rycoat windshields, the Pole Cam camera boom and Holdan/Datavision LED lights. I say this because, it may come as a surprise to know that all these essential film-making products have been generously sponsored by the manufacturers. The onus is now on us to make a good job of filming the expedition and to providing the producers with material that can be edited into a compelling film.

It is now dusk, Duncan, Geoff, Adrian and Eric have gone down into number three hold ‘tweendeck in order to salvage some parts from spare ‘flubbers’ that Brian has asked for. Hopefully, tomorrow, we can get back to the ice shelf and from ‘off ice’ to ‘on ice’ so that we can hand the parts over and continue with the last remaining tasks before the ship departs for warmer climes.

Oh, and to those who were concerned that yesterday’s report on Ran’s sortie with skies was inconclusive, I can confirm that he may have got to the South Pole for all I know, but he was certainly back at the caboose in time for supper. 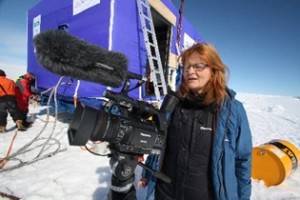