Posted by Hugh Bowring in From the Ice on February 7, 2013 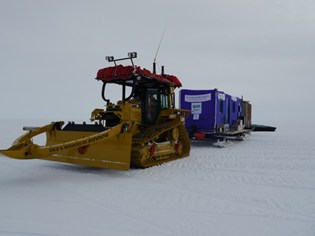 I have put it to the group as what to call the configuration of all the pieces of equipment once hooked together ready to pull out on our fuel laying journey. Their answer: Ice Train. This actually takes its name from the Land Trains that roll across the Australian Outback; we are not much different from them other than them having blue skies, red dirt, plenty of heat and kangaroos where we will have dark skies, ice, snow and currently no heat at all.

Today started off the same as any other day in the camp. After breakfast and getting suited up to go outside, we checked the Cats D6N’s over for oil and water along with our daily walk around. We proceeded to start them up and allow them to come up to operating temperature.

In the meantime, the final tidy up was taking place around the camp with all sorts of things being stowed here and there by Brian and Ran. Rob and Spencer were putting the final touches to the caboose wiring, while Ian and I were doing a bit of heavy lifting of large items onto the top of a container to be lashed down. 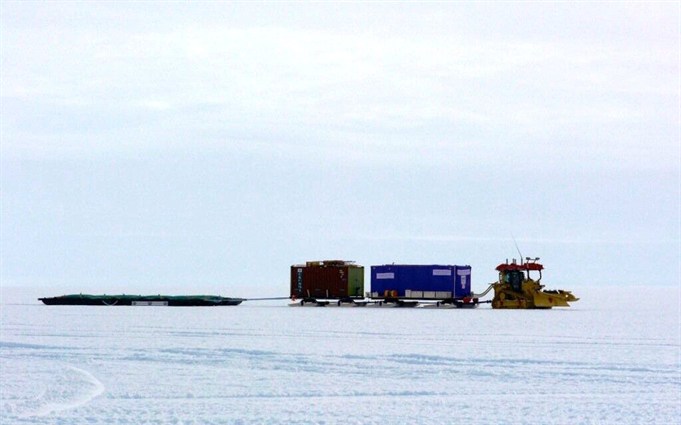 After all of the above we had to free up the fuel scoots with the D6N. This entails giving each of the corners a nudge with the ski on the end of the crevasse arm to free them from their overnight grip of the ice. I would never have believed it until l saw it myself, but as any ski goes across snow it brakes the corners off the snowflakes which turn to water and leave a smooth lubricated trail as you pass over the ice. You could not walk on the surface afterwards as it is like an ice rink. This water is a benefit while you are on the move as it acts as a lubricant; however the problem occurs when you stop for a prolonged period of time and it refreezes, sticking you to the ice.

The configuration we trialled today was a Cat D6N followed by the science caboose, then the storage sledge and finally the fuel scoots in a formation of 3 and 3. We decided to drop the seventh fuel scoot on each load to shorten our ferrying trips up through the mountains and cut our travel time down. After making the fuel drop we will return to this base with two scoots, leaving us with an even number of four going back up onto the plateau. Traveling light the second time will give us a faster travel time on the ice while we still have daylight.

The full hook up took us just under an hour to perform; l can assure you that reversing sledges with double articulating skies is no easy task with a bulldozer. You have to turn long before you need to turn and it becomes a bit of a guessing game, but after a few cuts at her we managed to get everything hooked up and ready to roll thanks to Ian on the radio backing me in.

The order of the day from that point on was to take up the slack on the Ice train steadily and keep a straight line till we could ascertain what the computer was telling us in the Cats with regards to engine loads and torque converter readings. All came well within tolerance, with the engine pulling a 96% load factor at full throttle 2150 rpm in 1.5 gear and 1975 rpm in 2.5 gear. The torque converter ratio was a steady 0.92 to 0.94 in gear 1.5 and 0.86 to 0.88 in gear 2.5. We were very impressed with the pulling capabilities with no spinning out on the snow while turning.

Tomorrow will be onward and upward as we head for the mountains to make our fuel drop. The only question that remains to be answered is what will happen on blue ice and when do we put the ice spikes in?

For all you kids out there, Mary Mouse has been entrusted to me by the lovely Jill Bowring. She has been safe and well tucked up in her box in my bed as she had been tired from her journey from the boat to the top staging site. Mary has told me that she will be ready and willing to go for her first drive in a Cat D6N tomorrow. Hooray for Mary! We will need to see if we can get Ran to sew her a boiler suit to keep her warm.