The Blog / Everything’s Going to Plan

A risk of sounding irritatingly smug, we had another beautiful day today. There was great industry from the outset. It was warm enough to work without gloves and everyone seemed to be in possession of an electric drill and focussed on the cabooses, fixing everything down against the ravages of weather that lie ahead. Everywhere you looked there were people up ladders, on their backs under the cabooses, walking into and out of the doors with a mouth full of screws and an expression of intent. Never has DIY been so comprehensively undertaken in so remote a spot by so many people drilling, screwing, cutting, hammering and advising each other on how best to do a particular task. 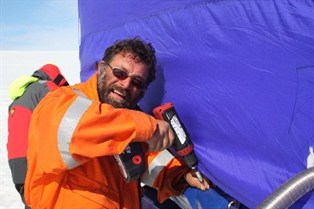 Strangely, the two eldest in our party, Eric and Glynn, were delegated with a job on their backs under the accommodation caboose fitting a sheet of heavy duty quilted insulation to the underside of the floor. You couldn’t see them but you could hear them when after a long, slowly waning whine of the electric drill, a barrage of expletives erupted to much applause from those who were within ear shot.

For a few, lunch was served from the caboose. It included a selection from the ration packs including toast, butter, tinned cheese, leek and potato soup or spicy tomato soup, tinned ham and garibaldi biscuits with Nutella spread all washed down with an isotonic power drink. While, on the ship, we had chicken macaroni and sweetcorn. During the afternoon more drums of fuel were unloaded and empty cardboard boxes and other packaging and refuse were loaded back onto the ship. The traffic of cargo has slowed down now and for long moments the crane stands idle and the VHF radios are silent. 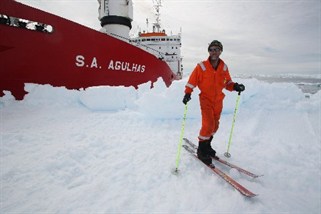 Ran took the opportunity to get on his skis and, with head down, set off with a degree of urgency to get in some training for his long trek ahead.

The Belgians have been helping us. We have established a good rapport with them. They have been helping with the drums and providing transport with their vehicles and sledges. They are living in the smallest tents I have ever seen. They are not small people Kristoff, Walter and David, but, somehow, they manage to fit into their tents. It is deceptive and makes the caboose look like a five-star hotel. We arranged to get some Coca Cola from the ship’s supply for them in exchange for Belgian chocolate. Everyone was happy. 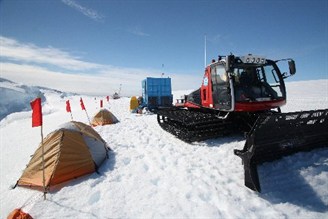 By evening, the expedition personnel had divided into two teams for the first time – Ice Group and Support Group. When it was time for supper, the Support Group made their way back to the ship while the Ice Group remained ashore and prepared for their first night in the caboose. Slowly but surely the expedition is taking form and within the next two or three days the ship will be ready to depart. This will leave the six intrepid travellers alone and independent. From then on, the story becomes theirs and my reports will come to an end. Like you, I look forward to following the story unfolding as winter draws near and the journey that has taken us five years to plan becomes a reality. But for now, we shall standby and await instructions from the Ice Group to see whether they require anything else drilled, hammered or screwed.