The Blog / A Trail of Bread Crumbs…

A Trail of Bread Crumbs…

A Trail of Bread Crumbs…

We began our journey back to the coast after departing from our fuel deposit over a week ago. It is nice to be moving downhill for a change. The Cats are enjoying it as well. The decent of almost… 2kms has them purring along at a break neck pace of up to 8km/hr. I forgot what speed felt like. I can’t imagine the shock I’ll receive when I return home and have to make 60mph on a motorway. 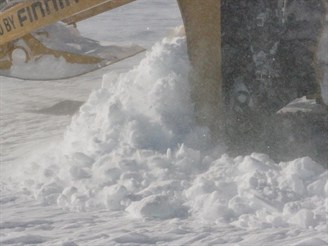 After making our way down the Gunnestadbreen pass in the Sor Rondane Mountain range, we have re-joined the Belgium supply route heading for the coast. Although it has only been two weeks passed since the Belgians have travelled out on this route and only three weeks since we travelled in on it, It is nearly impossible to make out the packed-in trail. The Garmin GPS does show a safe route between waypoints but due to the slight inaccuracy of the satellite position, it won’t necessarily place us directly on the hard packed path.
When we are headed back south in just a week, racing against time and temperature, every tiny fraction of speed is influential of our success. To most, it might not seem like much when discussing half a kilometre per hour, but spread across 2000hrs it becomes a massive deficit.
The difference in pace felt by each D6 between on and off trail could be as much 2km/hr. So sufficed to say, it is absolutely paramount that we locate and rail this trail.
To give us a fighting chance for maintaining visual of this trail, we needed to leave some sort of marking behind us as we made our way out to the coast. If the normal indentations left by tracks and skis of only two weeks ago were almost disappeared, we needed something more resilient to the eroding forces of the wind and more unaffected by the accumulation of snow.
One of the benefits to having a fully construction capable bulldozer on an expedition is we have the ability to carry a blade full of snow and manipulate the trail at will during travel with little to no effect of travel speed. By tipping one side of my blade into the trail and angling it back, I am able to leave a mound of snow almost knee high along one side of the trail. This is done without any noticeable change to speed or fuel economy.
By leaving this berm down the leeward side of the trail, the blowing snow that accumulates during our absence will drift to the leeward side of our berm. In our case, when we travel back south in two weeks, the berm will be on our right. If it works we will save up to 2 days just making it back to our fuel depot. Let’s hope it works.