The Blog / A Fond Farewell – by Spencer Smirl

Less than two weeks remain until our scheduled departure from the continent.  Talk of weather delays are already starting to make their way into daily conversation around the table.  I can remember after spending only three weeks working up at the diamond mine back home in Canada, talk of flight delay due to weather would really bother me.  It has been ten months here on the ice, and I will admit I miss an uncountable number of things from home an indescribable amount.  However, conflicting emotions resulting from a strange desire to stay here in Antarctica forever have resulted in these conversations of a delayed departure bringing a smile of relief upon my face. 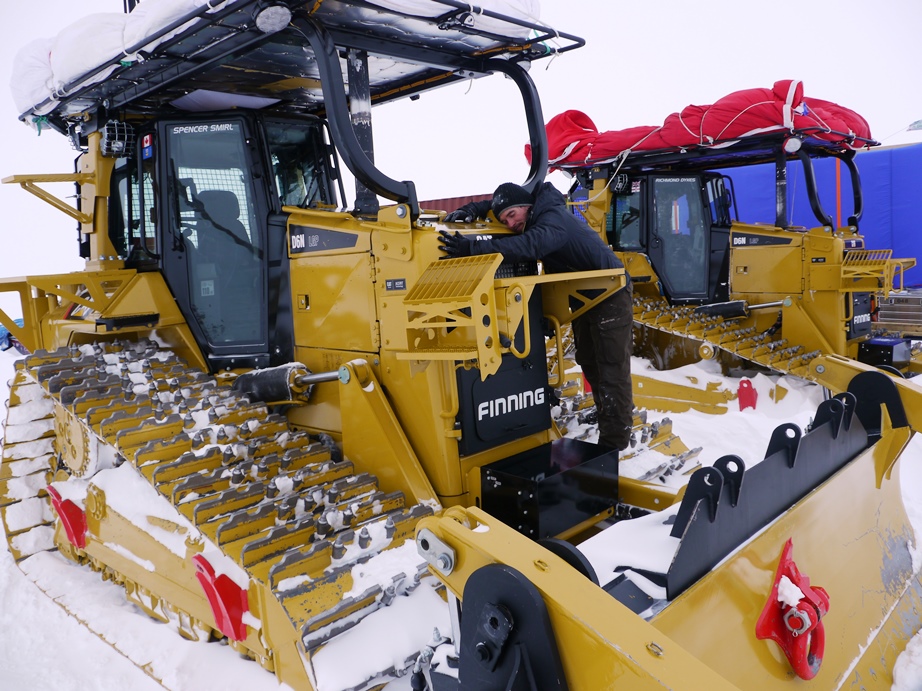 Looking south towards the mountain pass which brought us down to our current location here at the Princess Elisabeth research station, our tracks have already been erased by the elements, Antarctica reclaiming her natural undisturbed form of beauty.  A Cat D6N LGP track-type tractor is by no means a huge machine. In terms of construction equipment, the D6N resides in the smaller half of Caterpillar’s Bulldozer Equipment Line.  When attempting to combat Mother Nature with man-made machines, you can possess the biggest, the most powerful, the most appropriate machine for the task and she will always possess the strength to overcome all your efforts.  The challenging trek south we all enjoyed at the start of The Coldest Journey made its unfortunate end in May due to this very fact.

Our four-month hibernation on the Antarctic Plateau saw our two D6Ns almost completely buried under snow.  The internal compartments were packed solid with snow and even the operators cabins had a bit of snow inside as well.  Anywhere there was the slightest crack the snow and wind would force its way in and pack the cavity full and hard.  On the 10th September we began the daunting task of digging out the Cats to prep for start-up.  The temperatures were still below -45C and the wind still persisted at about 30knots.  After several hours of digging and several hours of pre-heating, both machines fired up without incident.  The 130km trip north had us crossing many crevasses, overcoming a few steep and icy descents, and navigating  a small stretch of “unknown to us” route leading up to the research station.  Both machines survived the entire trip without a single fault.  No leaks, no broken hoses, no system malfunctions of any kind.

Now, as they sit side by side beneath the mountains here at Princess Elisabeth, their job is done. Rover, with components removed for shipping, looks like a standard construction D6N once again. Seeker, however, still fully adorned in all its Antarctic armour, looks more normal to me now.  Seeker will not be joining us back in the UK.  Rover will return and join Richmond and I at various trade shows and press events but Seeker will remain here in Antarctica with its new owners.The four transitional stages of business ownership