The Blog / This is Africa

Posted by Hugh Bowring in Aboard SA Agulhas on January 1, 2013 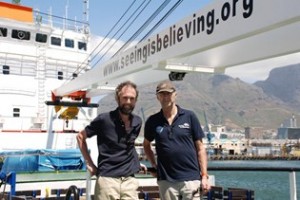 HAPPY NEW YEAR EVERYONE!! Thanks for all you lovely messages of support.

Here’s Anton’s latest blog from the ship written over the last couple of days:

We arrived on Friday evening.

The approach to Table Bay and Cape Town harbour is special. After 3 weeks of isolation in the vastness of the Atlantic, suddenly marine life abounds and even though land is still some distance ove…r the horizon, you can tell that it isn’t that far away. A couple of days north of here we started to see small Yellow Nosed Albertrosses. They weave about, gliding on their exquisitely elegant wings behind the ship constantly on the look out for a discarded morsel, seldom landing, constantly alert.

As we closed the land, we encountered large fronds of kelp, presumably plucked from the coastal waters by the pounding Atlantic rollers and swept out to sea. Small, lithe seals dart about or eye us inquisitively as the ship pushes on, rising and falling with the long, smooth swell.

Dark red jellyfish and a variety of sea birds, including gannets, terns and all sorts of gulls litter surface, lazily riding the swell until our breaking bow wave forces the birds reluctantly to run for their lives with splatting feet and flapping wings. We saw a couple of whales north of Robben Island, where Nelson Mandela was incarcerated for so much of his life.

Captain Dave chose an approach to Cape Town that brought the ship inshore and followed the coast from Saldhana to Table Bay. This way, we were in range of a mobile phone signal and suddenly the decks were alive with texting cadets telling family and friends they were almost home. There was hardly a person on board who wasn’t staring into the palm of their hands and oblivious to the abundant sea life around them. But, they have seen it all before and eight weeks away from home creates a greater urgency.

Jill, John, Heather and I took up position on the Monkey Island (the open deck above the bridge) among the clutter of electronic masts and aerials, to observe the activity around us with an eye constantly on the horizon to catch a first sight of Table Mountain in the distant haze. But it wasn’t until late afternoon that we finally saw the unique silhouette and early evening that we slowed as the pilot boat came alongside in the bay just off the outer harbour wall. Rowan and the deck hands took up their stations on the foc’sle and poop deck to handle the lines in readiness to secure the ship alongside the East Pier wharf. After 6,000 nautical miles and exactly 22 days since leaving London, we had arrived.

We had been told that South Africa would be on holiday for much of our visit. This was a shame as certain problems faced us. The fact that we got into the harbour was due to the generosity of our agents, Rennies, and the ship’s managers Smit Amandla whose combined clout eased the draconian conditions that required us to pay for the ship’s stay in advance and in full. However, the costs still confront us and, had it not been a public holiday, I might have had a chance to ask the authorities for a degree of benevolence on their part. However, this is not to be – yet.

My frustration is due to the very great missed opportunity for us to promote the charity Seeing is Believing. The Waterfront area of Cape Town is packed with tourists. They are only a stone’s throw away but completely ignorant of our project or, indeed, the ship’s innovative role as a cadet training vessel. If only the media could be attracted to this enterprising ship and the story of its presence in port, it could reap rewards. But, hey, this is Africa.

Yesterday, I went early to the airport to pick up my intrepid colleague, Ran, who was flying in from London. I took a video camera to capture the moment as he came through the ‘Arrivals’ gate. I knew he would be heavily laden. This is not a lightweight expedition. I was thrilled to see the apparition which emerged into the hall. Alone he strode pushing a trolley (or was it a Zimmer frame?) piled high with tattered bags and his ancient brief case with the broken clasps (which have been broken for probably 30 years). It is summer here. It is hot! Stacked on the trolley were three large cardboard boxes with the words “hand warmers” printed all over them. Suddenly in that eccentric moment, I felt the expedition was at last about to begin in earnest. At our departure from London, our Patron, HRH The Prince of Wales described the expedition as “wonderfully dotty”. Watching my friend walking with his baggage through the airport (unaware that I was watching and filming), I really wanted to shriek with laughter.

We have a small problem. It is Sunday and apart from the essential crew members, the ship is quiet. Expedition members are beginning to arrive on a daily basis. I’m not exactly sure which cabins are available to put them in. Food is now in very short supply except for onions and eggs. Even bottled water has run out. The tap water is fine but its brown colour is strangely reminiscent of the North Sea. I’m all right, I have a huge supply of biscuits (Jill and my three daughters are red heads – maybe that is why I am so fond of Ginger Nuts). However, Cape Town is not in short supply of food and all around us are restaurants of every nationality catering for every taste. After a long voyage, eating ashore is very tempting and there are only so many onion omelettes a person can eat each day. We therefore set off at meal times to sample local delicacies with exotic names. However, I know that soon this novelty will wear off and we shall be back in the ship’s dining room just as soon as the holidays are over and deliveries are back on track.

It is now early on Monday morning. It is New Year’s Eve. I have heard Rowan, the bosun, calling to colleagues ashore. I have looked out of my cabin porthole and there is a big tanker lorry alongside with the company name “Marineslops Limited” from Durban. This means that it is a working day and maybe we shall get some fresh food. I cannot tell which way the slops are going but it’s my guess that it isn’t a delivery -unless we have got slops for breakfast. But no, it’s eggs (and onions if you want them).
Ran is itching to get into the hold in order to get at his polar tent and small sledge which are in a container. The container has a padlock. The padlock has no key except the one Brian has in Britain. But Brian isn’t due to arrive for a couple of days yet. So Rowan must cut the padlock and Ran can scrummage through the contents of the container to find his kit. We have been lent the Geological Laboratory for Ran to set out his equipment and prepare it for Antarctic use. Like a Jack Russell terrier, Ran is entirely focussed on the hold. He’s got to get into the container and he’s got to get into it now. Luckily Ian Prickett is on board. Ian is Brian’s right hand man and seeing the urgency of Ran’s predicament, he offers to help Ran get the kit. By midday Ran is happily ensconsed in the Geological Laboratory hidden under a pile of tent canvas.

It’s now ten minutes to midnight. It is blowing a gale out on deck. We are going to brave the wind to watch a firework display which is near the ship. Table Mountain is all lit up. The sky erupts around us with cracks, pops and bangs. This is Africa! Happy New Year from us all.