The Blog / “Bird-watching” by Jill Bowring

Posted by Hugh Bowring in Aboard SA Agulhas on January 11, 2013

We started on the second day out of Cape Town after Adrian McCallum, our resident scientist from Australia, set the hours from 9-10, 2-3pm and 7-8pm for the task, and encouraged as many as possible to join in. It turned out to be quite a social activity, especially since there were practically no birds to spot. It is well known that once you have left coastal waters with the terns, cormorants and seagulls it becomes quite quiet, until we hit the Antarctic Convergence where the cold, nutrient-rich water supports a vast and complex hierarchy of flora and fauna. This brief lull allows us time to learn to identify and photograph.

We have two reference books – sadly they do not always agree on their descriptions, so confusion is rife. Just about every bird on the first day was identified as a cory’s shearwater- it became the default ID for that day. The second day, when the wind was blowing force 9 and the ship pitching quite heavily, sooty albatross was the favourite. Now we have access to the ship’s doctor’s very good bird book so, combined with pouring over photos during the evening in the comfort of the Officers’ mess, identification is getting better. But default birds still happen – there were many ‘zig zag’ (a nickname until identification has been checked and agreed) birds yesterday and this morning.

The group has naturally divided into spotters and identifiers. Spotters shout “bird” and keep their eyes firmly focussed on it , whilst giving a running update of its position , handing over air traffic control to the next appropriate sector when necessary. Ran is a spotter, usually underdressed for the part and standing in the windiest place – he says he is “acclimatising”. An identifier, usually Mike Stroud or Duncan Cameron, will run to the position and pronounce their verdict. Lean, lanky Adrian gets out his notepad, which today is very soggy from the rain and fog (the weather must be bad – it’s the first day he has spurned his shorts and Crocs for boots and jeans). He jots down the results for each 10mins of the hour and decides whether the bird seen off port bow is the same bird as one seen later but is just circling around the ship at a distance , occasionally coming close enough to be spotted again. I thought a paint ball gun could come in handy so we can cover a spotted bird with glitter or fluorescent paint.

Mike and his wife Thea’s son, Callan, on hearing about his bird-watching parents, sent the following tongue-in-cheek protocol to them:

“You’re doing an awful lot of birdwatching. Are there rotations to ensure a 24-hour birdwatching cover? And has it taken into account the average 95 degrees of visual arc that, on average, a human can cover without taking their eyes off the scene before them? Might I suggest a 12-person rota, teams of four on eight-hour shifts stationed back-to-back in order to mitigate blind spots and with 2.5-degree overlaps in fields of view. In the remaining 16 hours that the teams have ‘off’ per day, at least 2 should be dedicated to competitive staring contests with a view towards reducing blink-induced bird misidentification. The winner of the staring contests is rewarded with incentives such as chocolate rations, and the loser of the day gets no dinner. In this way your birdwatching prowess will be maximised to the best degree that science can offer.”

We hope Adrian won’t take it seriously, I would end up missing too many dinners. 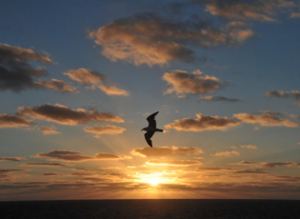