Posted by Hugh Bowring in Aboard SA Agulhas on January 12, 2013

We have been at sea now for 5 days. It seems like way longer though. Surprisingly I have managed to fend of Sea Sickness. Everybody has. I have been cheating though. For the first three days I was popping cyclozene tabs like they were tic-taks. I have weaned myself down to just a morning tab. Just in case. The first day was definitely one of the most interesting days of the five. As I had stayed out very late Sunday night before we sailed, I had went straight to bed shortly after we were out of the harbour leaving Cape Town. I was having the most enjoyable little nap in my bunk when this extremely loud crackly voice bellowed out of a loud speaker in our ceiling. I didn’t even know we had this speaker. Richmond later asked me if I was glad he cranked the volume. To which I sarcastically replied, “so glad”. The voice pierced through the protective pillow I had pulled over my head like an air raid siren. During these confused and drowsy first moments of my revival, I must have missed the first part of the message that indicated that the following is just a drill. When I finally realized what the voice was saying I flew out of bed ignoring my pounding head. I thought we were abandoning ship for real. Those two words are just about the most terrifying to hear for a first time sailor. “ABANDON SHIP!! ABANDON SHIP!!” I crashed to the floor, missing the ladder from my top bunk completely. Luckily I had remembered seeing the evacuation instructions on the inside of the closet door. I quickly reviewed them as I pulled on a few clothes and I was out the door. Ricky, the ship Purser, was in the hall directing passengers. “Spencer, where is your life jacket and immersion suit? And do your shirt up and put some shoes on!! I crashed back into the room, kicked off my flip flops, found my life jacket and immersion suit, stepped into my sneakers and raced back out the door. Down the hall to the heli deck I ran, Heart bonding. I hadn’t looked outside yet and half expected water to be rushing over the sides. As I joined everybody on deck, they all looked so calm. The First Officer was standing in the middle taking roll call. “S.Smirl”? “Present” I shouted back. 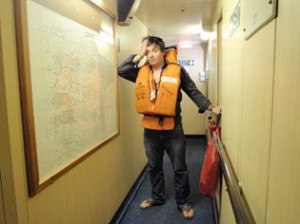