An ice shelf is a thick floating platform of ice that forms when a glacier or ice sheet flows down to the coastline and onto the ocean surface. Other than in Antarctica ice shelves are only found in Greenland and Canada. The thickness of ice shelves can range anywhere from about 100 meters up to 1000 metres.

Much of Antarctica is fringed by ice shelves. Ross and Ronne-Filchner ice shelves each have areas greater than the British Isles. A total of 44 percent of the Antarctic coastline has ice shelves attached. Their aggregate area is almost 1 million miles²

Ice is less dense than water and because near the coast ice sheets generally rest on a bed below sea level, there comes a point where it begins to float. It floats in hydrostatic equilibrium and either it stays attached to the ice sheet as an ice shelf, or breaks away as an iceberg. Being afloat, ice shelves experience no friction under them, so they tend to flow even more rapidly than ice streams, up to 3 km per year.

Across the base of ice shelves, sea water and ice come into contact. Where this sea water is warm enough, the ice shelf will melt, adding cold fresh water to the sea. This diluted seawater eventually helps to form a water mass called Antarctic Bottom Water which is present in many of the deepest parts of the ocean.

Eventually, ice breaks off the ice shelves to form icebergs. In some instances ice shelves may be sensitive indicators of climate change.

The incredible photo below was taken by the Team onboard S. A. Agulhas back in January. 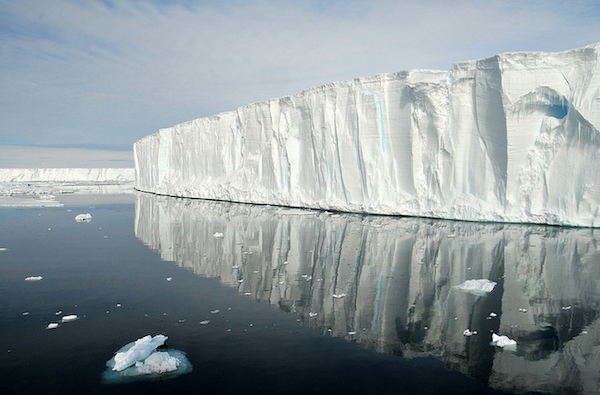