The Blog / Fuel Transfer – a blog by Spencer Smirl

Of all the chores we have to complete out of doors at our winter camp, re-fuelling is the most difficult; it is also the most important. No fuel would mean no generators and no generators would mean no heat. When it is -50 degrees Celsius outside, it doesn’t take long without running generators to drop the interior caboose temperature to below freezing. It is a good thing the Perkins generators are very fuel efficient: in the nine weeks we have been parked at our current location, we have only had to transfer fuel a total of four times. As you all know, the weather on this part of the continent has been horrendous, we have seen temperatures as low as -57 degrees Celsius and gusting wind speeds approaching 70mph (110km/h). Such conditions make any extended duration outside nearly unbearable. 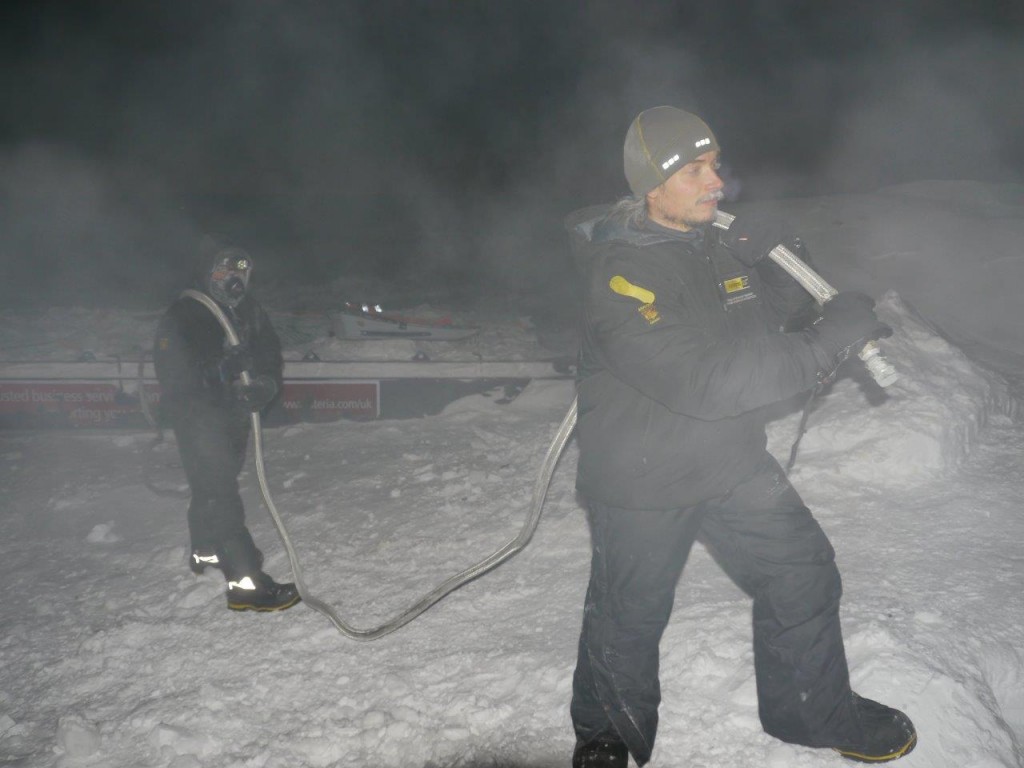 To transfer fuel from our fuel scoots into the 750 litre day tanks within each plant room, each caboose is fitted with an electrically driven, vane type fluid pump. We connect a length of -50C rated, steel braided fuel hose from the outlet on the fuel scoot to the inlet on the outside rear wall of the caboose; from there it enters the caboose through a volume counter. (To date, we have transferred over 100,000 litres of fuel between the two pumps; most of this volume was accumulated during the initial task of moving the fuel from the drums into the flubbers when we first arrived at Crown Bay). We use these counters to keep track of remaining fuel in our scoots as well as to tabulate our fuel consumption rate.  From the counter, the fuel arrives at a junction valve; there are two of these, one before and one after the pump. These valves allow us to draw fuel from either a fuel scoot or the day tank in the plant room, and then either pump it externally to fill the vehicles or pump it directly into the day tanks.

As it has had a strong influence on much of our lives here on the Antarctic plateau, the decreased air pressure and density at our current elevation has also had an enormous effect on the operation of our fuel supply to the cabooses. First of all we are no longer able to run the fuel level below half tank. At its lowest point in the tank, the fuel level is situated approximately half a meter below the fuel pumps of the generator. In addition to that fact, the fuel is extracted from the bottom of the tank from an internal stand pipe and exits from the lid approximately 1.5 meters off the floor. Combined, these conditions stress the fuel pumps ability to withdraw fuel from the tank. We have also experienced that at our current altitude, once the fuel level falls below the level of the pumps, the generator struggles to maintain full load. For this reason we maintain the fuel level above the pumps at all times.

When pumping fuel, to successfully lift the fuel from the scoots at ground level up to the pump in the caboose at approximately 1.5m above ground we rely heavily on the internal pressure within the fuel scoots to prime the pump. However, when the fuel level within the scoot gets below one third of its volume, it becomes much harder to extract the fuel. A few days ago, we transferred fuel for the fourth and possibly final time here at our winter camp. It was stressful to say the least. Saturdays are our caboose scrub out days so we postponed our fuel transfer until Sunday. By the time we were set up to transfer fuel the generator was already showing signs of struggle within the fuel system.  When we engaged the fuel pump it was extremely distressing when we were unable to get any flow of fuel. The conditions outside were terrible with the wind chill well into the -70Cs.  In weather like this any little problem becomes a really big problem. When disconnecting and re-locating fuel lines there is a huge risk for personal injury, the sub-zero temperature of the fuel can instantly freeze skin on contact, and because our fuel has chilled at -50C for several weeks, it is especially dangerous.

Upon inspection of the fuel flubber, we found that accumulated drifting snow had distorted the fuel bladder and was trapping fuel in the outer extremities of the flubber. In addition the positioning of the outlet valve had changed so as not to allow any pick up of the fuel. After removing the piles of snow and relocating the suction line to the vent port in the centre of the flubber, we were able to syphon fuel to the end of the line and re-connect it at the caboose. As soon as we opened the gate valves at the inlet to the caboose, the negative head pressure caused the fuel to recede down the line back towards the scoot. Once again we were unable to obtain any flow of fuel out of the pump. This was a first. Normally when a flubber becomes difficult to pump fuel from, we would use one of the Cat D6N’s to tip the scoot to allow the fuel to run to one end and this would usually provide the boost needed to prime the system. As both Cats are currently under three meter deep snow drifts, they weren’t going to be much help with the current situation. 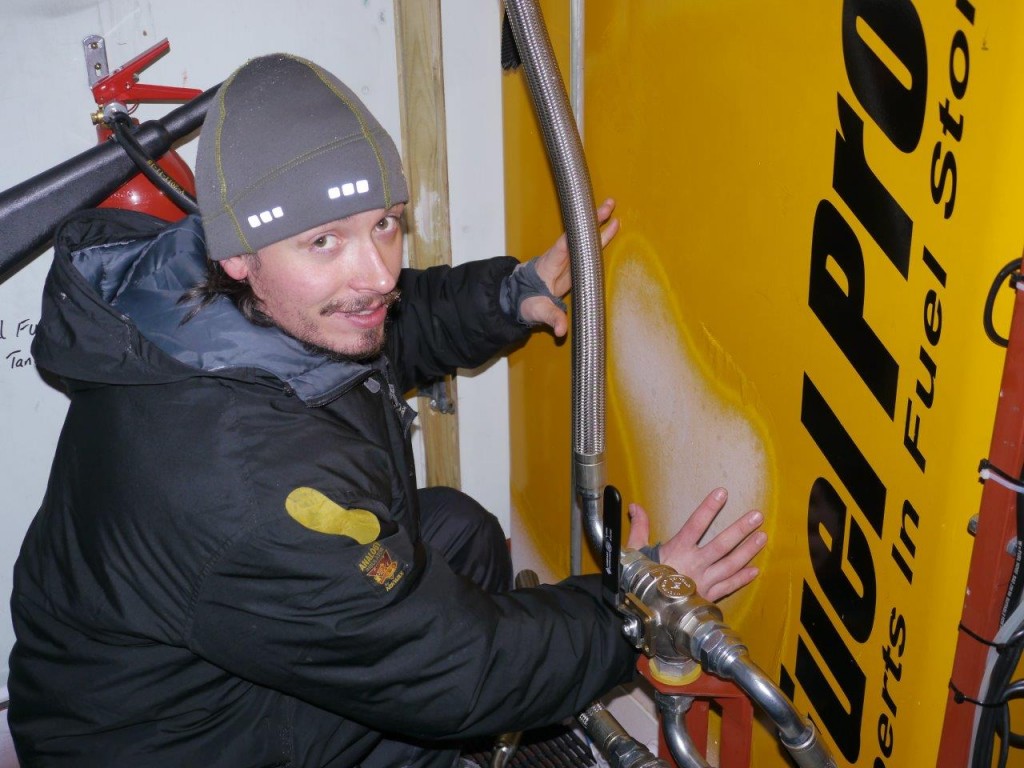 We had never pumped fuel out of the day tanks for any reason before; luckily the pair of junction valves allowed me the ability to do so. This confirmed that the pump was still able to move fuel and a mechanical failure was not the cause of our dilemma. In doing this however, I noticed by another stroke of luck, that because we were no longer running our fuel level out to its lower limits, the level in the tank was still above the inlet and outlet ports on the rear wall of the caboose. This meant that we could orientate the valves in such a way that when we disengaged the pump, the fuel could run out of the tank, past the pump, down the line to the flubber and all in turn, prime the system. As we watched the level drop in the tank, knowing we were already dangerously low, we could only hope this would finally solve our problem. As this was a last attempt, we needed to know if we had enough fuel hose to reach another fuel scoot or would we be on restricted fuel rations while we rushed to uncover and start one of the D6Ns.  Richmond left the plant room and began pacing the distance to the next closest fuel reserve. As I stood up to throw the switch for the pump I was sceptical of any pending success, but as the whine of the pump suddenly changed tone and the wheels on the counter began to spin, I was well relieved, we all were.

It doesn’t take long for the fuel rushing in at -50 degrees Celsius to soon restrict any contact of the valves and lines to gloved hands only. It always reminds me of images of transferring fuel into space craft, when the frost begins to build up and the icy vapour swills around lines. You can almost feel the temperature in the room drop as 500 litres of frigid fuel fills the tank.  We finished filling the fuel tanks in both cabooses and re-stowed all the hose.  I was quite pleased as well with Richmond’s news, “we will be able to reach the three closest fuel scoots with all our spare hose”. If weather prevents us from departing from our winter whereabouts within the next two weeks, at least we now know we have lots of fuel within reach and our next day of transfer should be much easier.