The Blog / Choosing the Moment 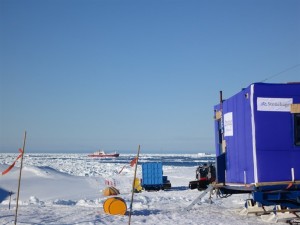 It was a grey and breezy start to the day but, more importantly, the bay was still full of tightly packed sea-ice. It looked very unlikely that the ship would be able to reach us and it wasn’t long before a chat on the radio with the ship’s bridge confirmed the news. It’s a frustrating fact of life down here that you have to remain flexible and make the most of conditions when they swing your way. While we wait for that moment, which will allow us to complete the final offload, we do at least have the chance to press on with the assembly and commissioning of the caboose units.

We were soon all busy and the list of jobs on the white board above the dining table is shrinking and the new jobs which are added to the bottom of the list are less critical and quicker to complete.

By lunchtime the sun had returned and the breeze had eased but we knew from updates we got from the ship that conditions off the coast were not much improved and they were reporting 30 knots of wind and a significant swell. Ice along the coast had, however, opened but it was lingering at the head of the bay which is exactly where we needed to get the ship

Late afternoon Ian and I went down towards the edge of the ice shelf so that we could get a shoreside perspective and pass the information to the ship. As we approached we had a disorientating moment as all did not look as it had done previously. We stopped a safe distance away and before our eyes a large area of the shelf broke away and tilted on its side before crashing into the sea. It was one of those moments where you just stand and look in awe at the power of what is happening. This was raw nature in action. We weren’t in any danger so we just stood and watched.

As the swell did its work several other large areas of ice slowly peeled away, crumbled and fell into the sea to join the mass of ice already heaving up and down in the swell. It was quite a significant collapse with hundreds of tonnes of ice, each the size of several large houses, falling victim to the sea. It was pure chance that we were there to witness it and it was sobering to realise that the area where we had unloaded the vehicles, the fuel and all the cargo is now floating around in the sea in a thousand pieces, but it has to be said that given the sea’s conditions we would have long since retreated out of harm’s way. Within five minutes the coastline had been eroded by 50 metres or more and then it all stopped and it was as if nothing had ever happened – but we know the story. When the ship finally returns we will have to make a careful assessment before we can offload those last few remaining items.

Back at the caboose we spread the news to the rest of the team and the ship, which was watching from a mile or so offshore. It was a blatant reminder that we need to choose our moments well and heed the signs that we see.

Picture: The SA Agulhas waiting offshore this afternoon with ice packed against the shore