“Today has been very successful. By this morning virtually all the sea ice had drifted out of the bay. There was just one floe with an inquisitive group of penguins observing us in the morning sunshine. We manoeuvred the ship slowly to the head of the bay and pushed the bows into the low ice shelf. By driving the ship gently ahead with the autopilot set, the ship has remained in this position all day.

We were greeted by the Belgians who had driven from their base, Princess Elizabeth, some 200 kilometers away in just 14 hours. They took Brian, Ian and Duncan Cameron to see the lie of the land. On their return, Brian held a meeting on board with all the expedition personnel to explain the unloading plan. In essence, it was decided that all the heavy items of equipment should be unloaded first. As the Science/Workshop caboose and its sledge was already on deck, they would be unloaded first. By positioning them on the ice near the ship, the pump (housed in the caboose) for the transfer of fuel from the drums into the sledge (or ‘Scoot’) mounted bladders would be at hand as the drums were unloaded.

The living caboose sledge was next. A certain amount of modification to the spreader beams was necessary before the two adapted containers that make the living quarters could be set, side by side, on the sledge. Before long, the first Caterpillar was craned out followed soon afterwards by the second one. The fuel scoots followed. By the end of the day most of the big items were sitting comfortably on the ice shelf. This evening we are unloading fuel. Five drums at a time are lifted out of the hold in a cargo net. These are deposited on a sledge. The fuel is then pumped into the scoot mounted bladders. With fourteen scoots, it will take a few days to transfer all the fuel but, the plan is to run a second pump to reduce the time.

It is now just past 9pm and the fuel transfers were planned to continue until 1am before work was due to stop. However, there is a slight increase in the swell which is causing the ship to shudder against the ice shelf and we have decided to pull away into the bay and see how things are in the morning. Sea ice is also drifting into the bay behind us which is cause for concern. We don’t want to get trapped here.

Throughout the day, the weather has been very sunny. The glare from the ice is bright and the air temperature is positively warm out of the wind. At noon it was 4 degrees C.

Everyone is well and happy with the day’s progress.” 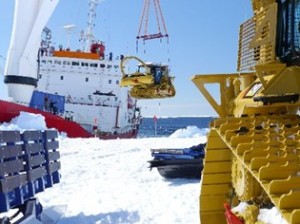