Posted by Hugh Bowring in Aboard SA Agulhas on January 14, 2013

Well it’s a week since we left Cape Town and the oven baked sides of Table Mountain seem a world away as we plod south at somewhere between 8 and 11 knots, buffeted by strong winds and swells of 5m+. At the current latitude of around 53o South, our target of 70o still seems a very long way off, with the next 17 degrees (approx. 1000 nautical miles) expected to take us another week. In addition, we are presently tracking close to the Greenwich or Prime meridian (0o longitude) and must head across to around 23o East in order to reach Crown Bay, adding still further to that distance. However, it struck me yesterday that this is the most amazing way to reach Antarctica…giving us a fantastic appreciation of the distances involved, the vast expanse of water that some 80 people are bobbing around in, something lost on us every time we jump on a plane and pop out the other end in a foreign country. Here we are getting a real impression of the scale of the South Atlantic and Southern Ocean, experiencing the dramatic changes in sea and air temperature as we cross the various converging currents that are found in these waters and seeing the animals that live here. It might seem strange, but this steady procession reminds me of touring by push-bike, whereby you are conscious of every mile and what might have been an insignificant 30 mile journey by car, becomes a tangible experience by bike, where you can’t help but be involved in the geography of the land and the weather enveloping it.

The three, hour-long birdwatching sessions continue unabated every day, despite the increasingly inhospitable conditions on the monkey deck, a place where a few days ago flip-flops were de rigueur, but now a no-go area unless you are wearing multiple windproof layers and several pairs of gloves. There Adrian McCallum braves the elements as he heads up a core group of hardy spotters that continue to support his scientific endeavours as they get thrown around by wind and waves. With eyes watering and binoculars shaking in the wind, they peer through the foam and spray to identify incredibly similar shapes darting rapidly through the air at some distance – my thoughts go out to them as I sit here in the relative comfort of my cabin and see waves rising well above where I’m standing as I look out of the window. It seems remarkable that we continue to see so many birds flying in what appears to be a complete wilderness and an incredibly hard place to survive. With the wind blowing 45 – 55 knots and air temperatures only a few degrees above zero, it’s difficult to understand how a small bird flitting between the swells and pulling up over the crests of breaking waves, can possibly have enough energy to keep warm and survive, let alone keep fly somewhere and flourish, but somehow they do.

And so we push on; the SA Agulhas – a tiny speck immersed in the motion of the Southern Ocean carrying a cargo of scientists, explorers, Caterpillars and cadets. The latter singing their beautiful harmonies during the evenings as we head towards the bottom of the earth. Talking of which – whilst my Aussie roommate is obviously used to being this way up, I’m sure I can feel the blood starting to drain into my head…. hmmm, maybe that would explain why Anton had a head-ache today? 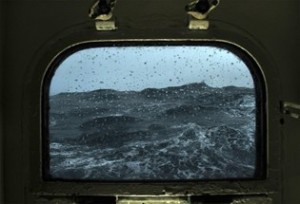