SA Agulhas will run on marine gas oil, while the main fuel used by the expedition team once ashore in Antarctica will be Jet A1 FSII which contains an ice inhibitor enabling it to remain liquid to -75°C. 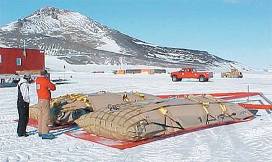 The fuel will be stored in fourteen 8,000-litre bladders which have been chosen over fuel drums or tanks because they are lighter weight and therefore require less fuel to transport. The bladders are double walled for additional strength, and insulated. They will be transported on flexible steel and plastic scoots which have been designed specifically for this expedition to minimise the risk of spills. The skids are large enough to carry one of the CATs if required.

A 700-litre day tank housed in the plant room in each caboose will supply fuel to the generators and heaters in the cabooses.

Two drums of fully synthetic engine oil will be required during the traverse, as well as small amounts of hydraulic and lubricating oils, and greases which will be stored in drums/cans on the outside storage section of the science/mechanical caboose.

If a sledge with a fuel bladder falls into a crevasse the towing system will arrest the fall and fuel will be transferred to the spare fuel bladder(s) before the skid is extracted.

The 300-litre fuel tanks in the CATs will be refuelled at the end of each day via a fuel pump housed in the plant room of each caboose. Hoses will be attached via dry-break fittings on the plant room wall, allowing fuel to be pumped directly from the bladders to the vehicle tanks or into the day tanks.

The most likely cause of a fuel spill will be during fuelling and maintenance work. Bladder ruptures and failure are deemed low risk. Each member of the team has been trained in fuel spill management. Each caboose will be fitted with spillage packs which will include bulldog clips used as a temporary fix to damaged tanks, spill equipment (usually overpacked UN drums – spill mats, pig putty, absorbents and plastic shovels.