The Expedition / The Ship: SA Agulhas / Finding A Ship

The search for the ship began in 2007. 30 years previously, Anton Bowring had acquired a small polar vessel, the MV Benjamin Bowring, for the Transglobe Expedition. From this experience, he knew that finding a ship which was old enough to be affordable but still in good working order was going to be a lengthy process. Indeed, until the expedition had a sponsor, even the cheapest ship would be too expensive.

The problem was compounded by the realisation that the only vehicle capable of undertaking a winter crossing of Antarctica was the Caterpillar D6N. Two such bulldozers would be required and they weighed around 20 tonnes each.  Their fuel, the accommodation cabooses, sledges, stores and equipment would all add up to a very substantial cargo which only a larger vessel than the Benjamin Bowring could carry. With these constraints very much in mind, the search began.

There are plenty of ice-strengthened vessels in commission around the world. They fit into a number of categories. For instance, there are research ships, cargo ships, cruise liners and work vessels (such as oil supply vessels, tugs, fishing boats etc) and even ice-strengthened yachts. Although many are classed as “ice-strengthened”, there are different levels of strengthening and most are not suitable for the sort of heavy pack-ice which the expedition could expect to encounter in the southernmost latitudes off the Antarctic coast.

A problem with older vessels is also that they do not meet the present stringent levels of pollution control. Inefficient engines, poor exhaust filtration and lack of sewage treatment are some of the conditions from which older ships suffer. The latest international regulations are intended to stop such vessels from entering Antarctic waters. Failure to comply would incur large financial penalties.

Despite all these conditions, the search was on and a number of vessels were considered. These included a couple of Canadian Coast Guard ships, a small ice breaker, a Swedish cargo ship, a buoy tender and an ex trawler converted into a yacht. Once the search was known about, ship brokers from around the world sent in their suggestions. These included car ferries, sailing ships, container ships, oil tankers, passenger vessels and so on. For a multitude of fairly obvious reasons, none were suitable and some were only good for the breakers yard. 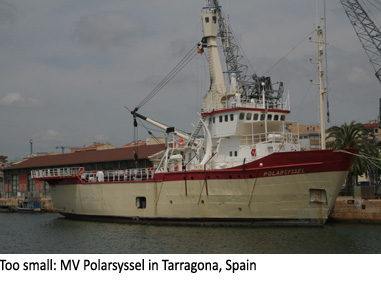 However, two ships came to Anton’s attention. One was an ice breaker, the MV Polarsyssel which was still in very good condition but on the small side. The other was rather too big but also ideally ice-strengthened and more than capable of handling the expedition’s cargo.

The advantage of the Polarsyssel was that she could be manned by a volunteer crew formed from the team that crewed the Benjamin Bowring 30 years previously. The owner was generously prepared to charter the ship for a modest price while he kept it on the market for sale. Fuel consumption was modest. The ship’s crane was rated at 20 tonnes. In fact it all looked perfect -except that, with the inevitable accumulation of expedition stores and equipment, it was finally realised that the ship was just too small. However, for over 18 months or more, the little ice breaker was firmly in the expedition’s sights and was only discarded when she was sold to a Spanish fishing consortium and taken to Mozambique.

Both ships were previously known to Anton. The larger one, the SA Agulhas – owned by the South African Government – had been in Antarctica during the Transglobe Expedition 30 years earlier and had lain alongside the Benjamin Bowring at the ice edge when both vessels were unloading stores and equipment in 1980. Because of her size, Anton initially gave no thought to the South African ship. She was far too big and, in any event, there was no indication that she was available. However, in 2009 it became clear that the SA Agulhas was soon to be replaced by a new vessel. At first it wasn’t clear what the South African government planned to do with her but it was important to ensure that the owners knew of the expedition’s interest in the very unlikely event that such a ship could be afforded by the expedition. As a result, enquiries were made but answer came there none! 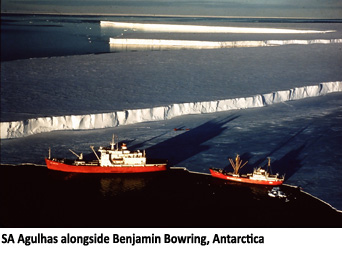 By now the expedition had a major sponsor, Standard Chartered Bank. With their very generous support it was, at last, feasible to consider chartering a modest vessel. The search continued and visits to Spain, Newfoundland and Germany came to nothing.

With the support of the South African High Commission in London, a further approach was made to the South African government. Still the future of the SA Agulhas was unclear. Even if such a ship had been available, the running costs alone would have been prohibitive. The ship normally runs with a crew of up to 40 personnel, and the fuel consumption would be considerably more than the expedition could afford. Despite these misgivings, with support and encouragement from sponsors and the High Commission, Anton continued to explore the possibilities.

Suddenly, in early 2012 it became clear that SA Agulhas was to become a cadet training ship. Operated by the South African Maritime Safety Authority (SAMSA), the ship was about to be prepared for a new life. Following further enquiries and against some competition, Anton was invited by SAMSA to discuss the possibilities of a joint operation with them and attended a meeting in Cape Town. The outcome was better than Anton could possibly have hoped for. The new owners were very receptive to the idea of chartering the ship to the expedition on condition that they could continue to run their Cadet Training Scheme. From the expedition’s point of view this was a perfect marrying of interests. Such a proposal would combine the expedition’s requirements, which included the opportunity to undertake scientific research, develop material for the educational initiative being prepared by Durham’s Education Development Service, and draw attention to the charity “Seeing is Believing” which Standard Chartered Bank were enthusiastically supporting.

Because of the mutual interests that such a voyage could support, SAMSA very generously allowed the expedition to charter the ship for a fraction of the commercial rate and, in July 2012 a contract was signed which sealed the agreement between both parties.

The ship will be under the command of Captain David Hall with 24 crew members. In addition, the ship will carry 50 cadets and three training officers. The six-man expedition Ice Team and 10 support staff will also be on board from Cape Town to Antarctica. 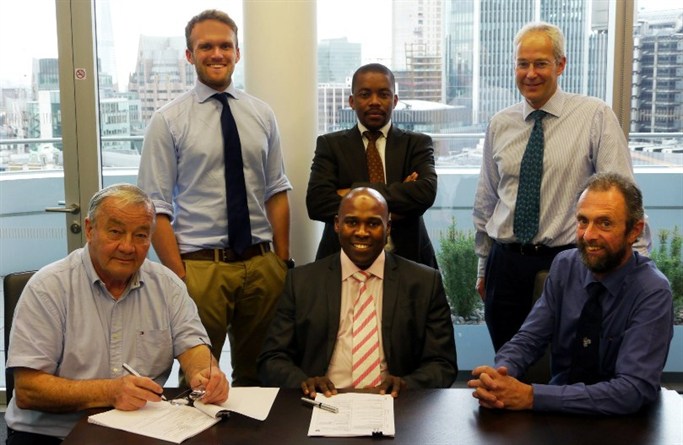